Even great coonhounds need a break. 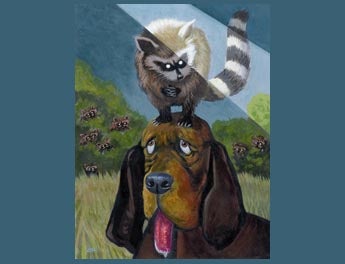 A fox I once knew had a pet rabbit. Whenever I walked through their patch of woods, I jumped the cottontail near the fox’s den. Even assuming the rabbit could outsprint the fox and enjoyed taking risks, I had to conclude that the rabbit kept its home and hide because the fox came to accept it as just part of the landscape.

Dogs respond to similar situations in the same way. The familiar is less interesting than the rare, and the too familiar can easily lead to burnout in your canine buddy. A coonhound breeder had a permanent raccoon cage that brought scent to the kennel during prevailing winds. A hunter gave his pup a coonskin rug for its dog house. Both men learned that constant, high-level exposure to the game you hunt doesn’t make a fanatic, single-minded hunting dog.

Degrees of Indifference
There are variations among breeds, of course. Face it, hounds are not as intelligent as dogs bred to accept human guidance. Adult pointers can learn that while penned birds are no fun, those same birds are fair game in the field. Still, I wouldn’t place a bird pen next to a youngster’s kennel or in line with prevailing winds for fear that bird-scent interest would fade into the landscape.

The game itself is also a factor.

Waterfowlers and bird hunters are limited by seasons and how much of their daylight hours they can afford to spend in the field. In these sports burn-out happens most often when an overzealous owner doesn’t train in a manner that always leaves the dog wanting more. Those who take hunting vacations usually see burnout only if they try to hunt one inadequately conditioned dog for too long.

Coonhunting is a different world. Working hours are not sacrificed. Many pride themselves on being “hard hunters,” meaning they hunt much of the night, nearly every night. The stories they tell sound a lot like the year-two problems we discussed in “Sophomore Slump” last November, but it can happen at any age. Their best-ever coonhound can go from an excited bark per breath at the tree to occasional halfhearted chops. It starts leaving the tree. Maybe this once-straight cooner takes a deer for a whirl. Your first impulse might be to hunt the hound harder to revive its enthusiasm. Wrong. Forcing more action onto a dog that already gets too much of a good thing results in big-time burnout.

This is not to say that one big vacation hunt will ruin a young hound. Quite the opposite. When the youngster shows signs of catching on to what the old hounds are doing, hunting every night for a week speeds its education. Apparently, there’s no time to forget what it learned the night before. Do this early in the season while the young coons are easy to tree. Later, the boredom of few tracks and the frustrations of dealing with wise old mating boars will encourage youngsters to run off game. After a productive early season, leave the youngster at home with its newfound enthusiasm intact.

Update to a Classic
Joan Bailey sent me a copy of How to Help Gun Dogs Train Themselves with 10 tabs stuck to various pages. Puzzled, I opened the book at one of the marked places and found her note. Joan’s already popular book, now in its fourth printing, has been revised and expanded in those 10 places, especially in the important area of retrieving. Also added is more on understanding your dog, from the keen observations of our mutual friend Ken Osborn. ($21.95; 866-296-6725; www.swanvalleypress.com)