Hunting squirrels with a dog is a blast. 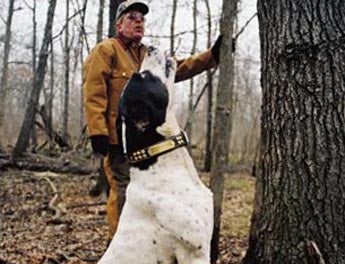 The woods are quiet. Jim Rhea cups an ear. “Listen,” he says. In the distance, we hear a short bark, then another.

We find Jim’s black-and-white treeing cur, Limbgripper Ranger, reared up on an oak, gazing into the branches overhead. The dog barks again.

“Where is he, Ranger?” Jim asks. “Is there a squirrel up there?” Jim shakes a vine that curls up to the place the dog is looking at and a gray squirrel shoots up the side of the tree.

“Get him, boys!” Jim shouts. My sons-four of them, ages 6 to 14-have been standing at the ready. Each shoulders his shotgun, trying to get the fleeing squirrel in his sights. But the squirrel is quick. It starts to timber, jumping from one tree to the next, before a youngster fires. The shot finds its mark, however. The squirrel plummets to the ground.

Ranger races to the fallen animal, gingerly picks it up and takes it to Jim.

“Which one of you guys killed this fine bushytail?” Jim asks.

“Then bring yourself over here, young man, so I can put it in your game bag. Ranger’ll have another one treed before you can say …”

Ranger has already treed again. The boys are all grins. As we follow Jim through the woods to another squirrel, there’s a big smile on my face, too. [pagebreak]

Tree Smarts
Jim Rhea is legendary in the fraternity of treeing dog enthusiasts. The 54-year-old businessman owns R&R; Kennels (870-238-4441) in Wynne, Ark., where he raises and trains some of the world’s finest pedigree squirrel dogs. He’s well known in field-trial circuits as well. Dogs from his Limbgripper line (Limbgripper Buck, Limbgripper Danny, Limbgripper Jack, Limbgripper Ranger among them) have won every major award in the sport, including dozens of state, regional, U.S. and world championships. Limbgripper Ranger, the dog that treed squirrels for my sons, recently was inducted into the National Treeing Cur Association Hall of Fame. (The Limbgripper name, in case you haven’t figured it out, is a Southern colloquialism for squirrel.)

I’ve hunted with Rhea on numerous occasions and each time have gone home amazed by the treeing abilities of his dogs. His dog-training skills are equally impressive. Hunting squirrels with dogs is a sport Jim has been immersed in since childhood.

“My grandpa started me hunting squirrels with dogs when I was just six,” he relates. “And I enjoy it just as much now as I did then. When you’re working your dog, you don’t have to slip through the woods like you do when you’re hunting turkeys or deer. You can talk to your buddies and enjoy yourself. If there’s anything more thrilling than watching a good squirrel dog operate, I’ve never done it.”

To many people who don’t know any better, the words “cur” and “feist” equate to the word “mutt.” In the world of squirrel hunting, however, curs and feists are registered dogs of pure breeding. A well-trained dog may sell for thousands of dollars.

“Almost any canine, from a poodle to a German shepherd, can be taught to tree squirrels,” Jim says. “The best dogs, however, are those bred for this purpose. The mountain cur, black-mouth cur, leopard cur, treeing cur, feist, treeing feist and mountain feist-all registered breeds-are some of the ones favored by squirrel hunters.”

Rhea starts working with dogs when they’re pups, giving them close daily contact almost from the time they are born. He starts training them before they’re weaned at eight weeks old.

“A dog can be trained a lot when he’s just a pup,” he says. “You don’t have to take him to the woods right away, but you can teach him to handle and to obey basic commands like ‘No,’ ‘Come’ and ‘Sit.’ You should start shooting a gun around the dog at an early age, making a gunshot part of his everyday life, so he won’t be gun-shy. Teaching a dog to handle well and learn who you are before you take him hunting is important.” [pagebreak]

Training Tips
Rhea’s pups are usually four or five months old before he takes them on their first hunt. The initial task in field training is to get the dog interested in chasing a squirrel. Rhea does this using squirrels caught in live traps.

“Let your pup smell the squirrel through the cage,” he notes. “Get him excited about it, then hold the puppy and turn the squirrel loose. Usually, if the pup has any ambition, it’ll run the squirrel up a tree.” This kind of training develops the hunting instincts that drive the dog to find squirrels.

“Pups must know what it is you want them to do, what you want them to hunt,” says Jim. “If you don’t have a live trap, drive a puppy around and when you see a squirrel, turn him loose on it. Another good way to start a pup is to find someone who has a good squirrel dog and take the pup along on a hunt where you’re killing squirrels; let it see what’s going on. If you shoot a squirrel, pick it up and tease the puppy with it. That gives him a desire to follow a squirrel’s scent.”

Work with your dog regularly, even if only a few minutes each day. Teach it that the proper response brings game and praise, and improper conduct brings a reprimand. With enough practice, the dog should eventually, and nearly always, do the right thing.

Jim points out that many good squirrel dog prospects are ruined by mistakes made during training. “Never shoot squirrels your dog hasn’t treed,” he says. “If you see a squirrel running through the woods, don’t shoot it unless your dog trees it first. Don’t do any shooting out there, period, unless your dog trees.” [pagebreak]

Nothing but Squirrels
A good hunting dog of any breed will chase almost anything that moves until it finds out what it’s supposed to hunt. The dog will be more fun to hunt with and will produce more squirrels for the gun once it knows which game is permitted and which is taboo.

“Don’t ever shoot any ‘off’ game while training your dog,” Rhea advises. “If you want your dog to be a good squirrel dog, then you don’t want to shoot any rabbits; you don’t want to kill a deer or anything like that until he’s been trained to hunt squirrels only. After you get a dog trained, you may be able to shoot a rabbit in front of him without messing him up. But when you’re training one, he’s just like a kid. If you want to keep a kid from drinking, you shouldn’t take him to the beer joint with you.”

The last time we hunted together, Rhea and I watched my boys slowly circle a tree in search of the squirrel that Ranger had chased up it. I glanced at Jim and saw that he was beaming from ear to ear.

“Why are you grinning?” I asked.

“I was just watching you and those boys,” he said. “Watching you guys have fun makes me happy.” He turned then and headed for the oak where Ranger was treed.