Be a Straight Shooter 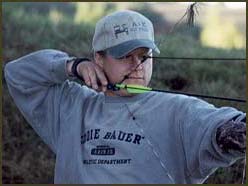 **Without a String Loop **
Here are the main reasons you shouldn’t attach a release aid directly to your bow’s string: 1. When you attach your release aid to the bowstring below the nock of an arrow, the apex of the string at full draw is below the nock. When you shoot, the string straightens out violently below the arrow, creating excessive oscillation in the arrow.

2. The release aid applies pressure up against the nock, which could create a bend in the arrow at full draw.

3. If you draw but don’t shoot, a release aid placed on a bow’s string can force the arrow’s nock to come partially off the string. This can be dangerous if you forget to press the nock back onto the string before drawing again.

4. A release aid may torque the string, which can affect arrow flight.

5. The jaws of a release aid can wear through a monofilament string serving.

With a String Loop
Here are the main reasons you should use a string loop:

1. A string loop positions the release aid (and the apex of the bowstring at full draw) directly in line with the arrow. As a result, when a bow is shot, all forces on the arrow are forward.

2. The string loop equalizes pressure above and below the nock, so the arrow remains straight as the bow is drawn and aimed.

3. The string loop eliminates any potential twisting of the bowstring with the release aid. Twisting will take place on the loop, not the bowstring.

4. A bow can be drawn many times without the arrow accidentally popping off the string.

5. A loop tied tightly to the string will help turn a string peep to the same position every time you draw, eliminating the need for rubber alignment tubing.

6. You can screw the loop up and down the center serving on the bowstring for perfect positioning. So okay, a string loop can give you straighter-flying arrows and a more forgiving bow setup, but what’s the catch? A string loop will shorten your draw length a little bit, depending on which loop you use. But that’s not much to give up when you consider all the benefits.