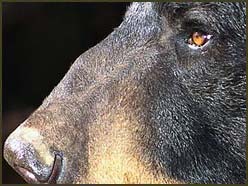 2. If a black bear attacks, you should:
A. Play dead
B. Fight back

3. Color-phase black bears-cinnamon, blond, chocolate and other colors-are most commonly found:
A. Along the West Coast
B. In the Great Lake States
C. In the Rocky Mountains
D. In Southern swamps

4. True or false: Veteran bear hunters can positively distinguish a boar from a sow by the animal’s facial features and other physical characteristics.

6. True or false: Black bears are able to climb any tree easily, while grizzlies generally climb with difficulty.

**7. True or false: **You should first shoot a bear in the shoulder to “break it down” before following up with another shot.

**8. True or false: **Black bears lose more than 30 percent of their body weight when they hibernate.

9. Two monster black bears in excess of 850 pounds were killed recently. Where did they come from?
A. British Columbia and Quebec
B. Manitoba and North Carolina
C. Pennsylvania

10. True or false: Hunting helps to maintain a bear population, and in some cases allows it to increase.

1. A.
Western bears seldom approach the size of bears from the East. This may be due to food sources or shorter denning time. In the West, bears remain in their dens until late April or even early May in some places, especially in high elevations. The biggest bears in the West typically come from coastal areas, where the mild climate allows them to roam longer.

The same thing applies in the East, with some huge bears coming from coastal states, notably North Carolina.

2. B.
If a black bear attacks, it intends to kill you, pure and simple. A grizzly might swat you and, if you remain immobile, might leave you alone. In the rare event a black bear charges, it may not bluff as a grizzly often will. Raise your arms to try to appear tall, shout at it and do whatever you can to intimidate it while looking for a weapon if you don’t have a gun or bear spray. A heavy branch, rocks or whatever you can grab will be better than using your bare hands.

**3. C. **
Black bears in North America are typically black, but many commonly have a white chevron-type patch on the throat. Colored bears are often the most prevalent in the Rockies. A cinnamon sow, for example, may produce twin cubs, one blond and one chocolate. All sorts of variations are possible. In fact, I’ve seen blond bears with chocolate legs, and other combinations as well.

**4. False. **
While some “veteran” bear hunters claim they can tell a boar from a sow by the length and size of its snout, or the shape of its head, there is no foolproof technique to determine sex. One outfitter buddy of mine, who once worked as a government hunter, killed 700 problem bears and has seen well over a thousand bears over baits. He told me he can’t guarantee that he can determine the sex of a bear, and that anyone who says he can is not being honest.

6. True.
A grizzly’s extremely long claws make climbing difficult, but if a tree has enough stout branches, it may work its way up. A black bear, on the other hand, can scamper up a slick telephone pole.

7. False.
The majority of the outfitters I’ve hunted with say it’s always best to hit a bear just behind the shoulder and take it through the lungs. Typically, a bear will go no farther than 50 yards when lung-shot. This is the only shot a bowhunter should ever take.

**8. False. **
This is a bit of a trick question because bears don’t really hibernate. Animals that do hibernate, such as groundhogs, have a severely decreased body temperature and reduced heartbeats. Bears have neither.

10. True.
Where hunting is permitted, a certain percentage of boars are taken. Boars will kill and eat every cub they can catch, and can keep a bear population depressed. By taking boars, more cubs survive.