Best of the Best

The "no champion left behind" way of enhancing the hunting breed gene pool. 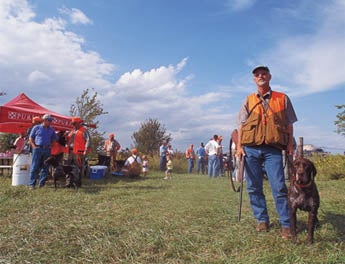 A “NAVHDA championship” might sound like an oxymoron. For 36 years, the North American Versatile Hunting Dog Association (NAVHDA) has held noncompetitive tests. Whether it was the Natural Ability Tests for young dogs or the Utility Tests for trained dogs, the challenge was always the points, not the other dogs.

That’s still the case. But starting this year, the NAVHDA Invitational, which will be held annually going forward, has higher performance requirements for entry. Only dogs earning a Prize 1 in Utility Tests will qualify; those that earn a Prize 1 in the Invitational are given the title of Versatile Champion, with VC prefixing their names in the registry.

The best thing about NAVHDA tests is that no judge is looking for eliminations to narrow the field to one winner. No judge is allowed a personal preference, which can lead to fads that often change hunting breeds into racing dogs.

So why call dogs champions when they pass the Invitational test? Because Americans love champions, and the extraordinary dogs that are capable of earning a Prize 1 in the Invitationals are in every way true champions. The concept of rewarding all champions, instead of reserving “champion” for a single dog that has had a better day or better luck that day, is actually quite brilliant. What follows is notoriety, after which these Versatile Champions raise the ability level of NAVHDA dogs by being in greater demand as breeders.

The Sum of Their Parts
All NAVHDA tests are based on evaluations of nose, search, pointing, desire to work, cooperation and physical attributes. Nose gets the highest index number (6), or weighting, in the scoring system. A good nose will scent birds quickly and easily and from a considerable distance but will function poorly unless the brain has learned, or can learn, to discriminate subtle differences in scents. Is the bird here? Was it here? Which way did the pheasant run?

[pagebreak] A good nose well connected to an intelligent brain still needs desire, that animated determination to do whatever it takes to get a bird to the gun so the dog can have it in his mouth. Desire shows up in search by helping the dog quickly discover what cover holds birds, then inspiring him to hunt that cover so thoroughly that no birds are overlooked.

Cooperation holds it all together, with the dog staying in contact with his hunter right up to the moment of point, which should be rock solid and intense. And finally, NAVHDA dogs are judged for conformation and coat, because the assembly of a dog determines how well he moves and how long he holds up in hours of hunts and years of life.

The Invitational Test scores versatility in a sort of “today we hunt upland birds, tomorrow it’s waterfowl” manner. The passing score is 166 out of a possible 200. In-between variations point to areas of not quite perfection. Besides the above basics, field work is scored on backing, steadiness to wing and shot and retrieve to hand. Water work adds heeling, steady at the blind, marking, honoring and blind retrieve. This is the one and only championship that produces exhaustive studies of the dogs entered.

Shorthairs on Top
The 2004 NAVHDA Invitational, near Mexico, Mo., drew 99 qualified dogs, and 32 went home Versatile Champions: 23 German shorthairs, 6 German wirehairs, 1 vizsla, 1 spinone and a pudelpointer. The shorthair dominance is explained by the fact that there are many more shorthairs, and therefore many more good ones to be found. Wirehair breeders must focus on flawless coats, and the gene pools are smaller in the other breeds. The 2005 Invitational will be held in the Twin Cities area of Minnesota, September 2-4. (navhda.org)