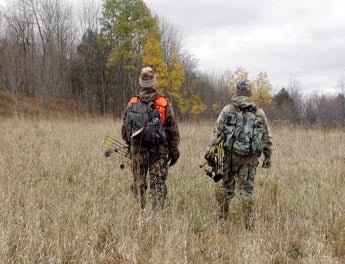 The best places to bowhunt for deer are the areas where people with firearms don’t tread. In these locations the bucks grow old even as they boldly pursue does through open woodlots and fields. That’s why we stuck to areas that are open only to bowhunters when we put this list together. You might be surprised at how many of these areas there are, even in your backyard.

Alberta
The archery world-record typical whitetail was tagged in 2001 by Wayne Zaft in Alberta’s Wildlife Management Unit 248. The buck grossed 222 Boone and Crockett points and netted 2086/8. Unit 248 covers 4,190 square kilometers (about 1,618 square miles) around Edmonton. In order to reduce the whitetail population, muzzleloaders are allowed there during a late primitive-weapons season. Other than that one hunt, only bows are legal in this unit.

Most of the hunting takes place on private land, as there is very little public ground in Unit 248. The unit encircles Edmonton, a bustling industrial city. Nonresidents are required to hunt with a guide in Alberta, so be sure your guide has the rights to prime deer-hunting areas.

Gently rolling hills descend to the Saskatchewan River, which runs through the middle of Unit 248. The land outside the city is mainly agricultural, but there is a good mix of wooded areas as well.

WMU 212, another bow-only area, covers 3,603 square kilometers (or 1,391 square miles) around the city of Calgary. Though it does harbor whitetails, the habitat is more conducive to mule deer. In this unit, which lies in a rugged portion of the Canadian Rocky Mountains near Banff National Park, bowhunters hunt for trophy mule deer and elk. The Bow River, a premier flyfishing stream for trophy rainbows and browns, courses through Calgary.

Arkansas
Arkansas set aside 31 Wildlife Management Areas for bowhunters. They provide more than 62,000 acres of quality whitetail hunting. Some WMAs allow two-day firearm youth hunts in early November for a limited number of permit holders. Other than these hunts, deer in these areas can only be hunted with a bow. Go to the state’s Web site to see a comprehensive list of such hot spots.

There are too many great areas to highlight, so we’ll just introduce you to one. The 4,884-acre Rick Evans Grandview Prairie WMA is a multi-use area. The state’s Web site says it is “managed for the protection, enhancement and restoration of the blackland prairie habitat found there.” But though it’s nice to know that Grandview Prairie represents the largest contiguous tract of blackland prairie in public ownership, it is even nicer to know that some huge whitetails, including a non-typical buck that scored 1997/8, have been harvested there by bowhunters.

Unfortunately, the state gives out only 40 tags for this unit. Bowhunters who draw are required to shoot a doe before they are eligible to take a buck. But you can’t just shoot any buck: Only whitetails with at least four points on one antler can be harvested. Though this WMA is mainly comprised of open prairie, it does have a network of wooded ravines that connect stands of mature hardwoods.

[pagebreak] Georgia
More than 41,000 acres of deer hunting are open only to bowhunters on 27 of Georgia’s WMAs. These areas range from a few hundred acres to the 22,000-acre Rich Mountain WMA in northwestern Georgia. The Cartecay section of this WMA (about 5,062 acres) is reserved for archers only. It gives up quality bucks because it is off-limits to ATVs and has remote areas.

The Cartecay River, which offers good fishing for rainbow trout, borders the bow-only section and provides canoe access to remote hunting areas. Rich Mountain is part of the southern Appalachians and supports mainly hardwoods with some pines. Wildlife openings have been planted with food sources, such as clover and rye grass.

Idaho
When a blast of frigid winter weather drives mule deer down from the mountains overlooking Boise, they retreat to their winter range on the Boise Front (Unit 39-3). This bowhunting-only area covers most of Ada County.

Every year 125 individuals receive permits on a draw basis to hunt the Boise Front, which is known for producing mule deer with trophy racks. Only 10 percent of the permits go to nonresidents. This spot-and-stalk hunting opportunity takes place from mid-November to mid-December.

Kentucky
About a dozen WMAs give preference to bowhunters in Kentucky. The largest of these, 10,598-acre Grayson Lake, allows a few two-day youth gun hunts spread out through the fall, beginning in mid-October. The success rate for the youth hunts is typically about 40 percent. Other than these hunts, only bowhunting is allowed for whitetails.

Most of the steep hills around Grayson Lake are covered with mature hardwoods and stands of pine. There is a good mix of open woods and thickets. Whitetails depend heavily on the mast crop in this area, especially white oak acorns.

Because no ATVs are allowed, the easiest way to access the more remote hunting areas is by boat. Motor into a quiet cove, beach your boat and hunt places far away from the nearest road.

[pagebreak] Maryland
Nearly 18,000 acres of bow-only deer hunting is available on 11 Maryland WMAs. Though most are small tracts, you can find room to roam on the 9,200-acre Liberty Watershed and the 7,380-acre Prettyboy Watershed. These areas, which envelop Liberty and Prettyboy reservoirs, may be hunted by anyone who obtains a free permit. You can also fish for bass and panfish in the reservoirs.

Prettyboy in northern Maryland is steep and rugged. Liberty, farther south and west of Baltimore, has more gently sloping terrain. The land around the watersheds consists of homes and agricultural areas.

In the center of the Reform area is a nuclear power plant run by American Union Electric, which leases its property to the state. This land has been open only to bowhunters for roughly 20 years, which is one reason it grows bucks that sport heavy antlers.

Texas
Seven public areas in Texas contain 54,497 acres that allow deer hunting only with archery equipment. The largest of these is the 25,000-acre Newton County Public Hunting, located in Unit 122 in eastern Texas. This timberland is leased from a private timber company that manages it for pine trees.

As part of a streamside management program, the timber company voluntarily leaves a 50-yard buffer of hardwoods along streams. Big bucks use these buffers as travel corridors.

Unit 122 lies within a region of Texas known for growing big bucks. Prior to the bow-only regulation (implemented two years ago), heavy firearms hunting reduced the deer population to a very low density. Now that only bows are allowed, the population is growing slowly. The low density, combined with light hunting pressure and good forage, is allowing bucks to grow whopper racks.

West Virginia
For more than 20 years, a block of four counties along West Virginia’s southwestern border-Logan, McDowell, Mingo and Wyoming-have been limited to archery-only for whitetail hunting. These counties now yield excellent trophy whitetail hunting. For example, during the 2002 season, of the 65 trophy bucks (scores of at least 126 typical or 155 non-typical B&C;) taken in the state’s 55 counties, 37 came from the four archery-only counties.

Several large public-hunting areas lie within the four counties, including the 17,000-acre RD Bailey WMA, the 7,810-acre Panther State Forest, the 18,000-acre Tug Fork WMA and the 13,000-acre Laurel Lake WMA. ATVs aren’t allowed in these WMAs. These counties also have large timber and mining company land holdings that are open to public hunting.es now yield excellent trophy whitetail hunting. For example, during the 2002 season, of the 65 trophy bucks (scores of at least 126 typical or 155 non-typical B&C;) taken in the state’s 55 counties, 37 came from the four archery-only counties.