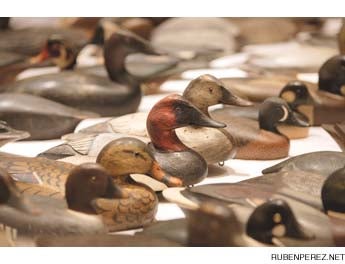 Who said money doesn’t grow on trees? Okay, it might not grow on trees themselves, but it certainly sticks to one of their byproducts, the duck decoy. These chunks of wood, crafted into what is now considered folk art, began their journey to becoming highly sought- after collectibles as a block of cedar, tupelo or pine. Turn the clock forward a hundred years, and what emerged from the hands of a master carver is today finding its way onto connoisseurs’ shelves… and bringing in lots of cash.

Rising Prices
Decoy collecting is at an all-time high, says Gary Guyette, an owner of the auction firm Guyette and Schmidt, which holds three auctions annually in Boston. With all of the publicity that ensued when a preening pintail carved by Cape Cod’s A. Elmer Crowell sold for $802,000 in 2003, prices have doubled and in some cases tripled.

Now, new collectors with a lot of money are looking to create an instant collection. They come to the auction with their numbers held high and don’t let cost stand in their way. This is good news for today’s top carvers, who hope to one day match the masters. Others worry, though, that prices are inflated. In November 2004, Guyette and Schmidt topped the previous high bid for carver Nathan Cobb Jr. of Cobb Island, Va., when it sold a brant he carved in the early 1900s for $241,500-double the estimated value. July’s auction again featured a swimming brant by Cobb. It brought in $120,000. For sellers (some of whom lucked into owning these antiques), this is like winning the lottery.

The Mona Lisa of duck decoys is yet to be discovered. Plenty of confirmed masterpieces are out there, but what often happens with sporting collectibles is that they sit for decades in the back of a shed or hidden in the attic, only to be found accidentally. It’s possible that an old decoy block on the mantle was in fact carved by one of the greats. Waterfowlers who have old decoys should educate themselves about the market, so they don’t make the mistake of throwing away what could be a half-million-dollar wood carving.

When the frenzy of bidding ended at Guyette and Schmidt’s July auction, some of the highest price tags belonged to the smallest duck that hunters pursue, the oldsquaw. Two oldsquaw decoys-one carved in the 1800s by Lothrop Holmes of Kingston, Mass., and the other carved in the early 1900s by Orlando Sylvester of South Hapswell, Maine-sold for $115,000 and $143,000, respectively. That’s some serious money for an old piece of cedar cut to look like a bird.

Another way to get an idea of what your decoy is worth is to bring it with you to an auction. Typically several dealers will set up shop in nearby rooms. A word of caution, however. Some might take advantage of your lack of knowledge and mislead you on the value, so talk to several knowledgeable people before making a decision.