"Hello. My name is Bob... and I'm an addict. I'm addicted to black bear hunting." We've got the cure for the black bear addicts. 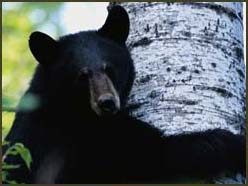 It’s true. I spend far too much time planning and executing bear hunts each year. I can’t get enough of it. And the reason has little to do with success. The root of my addiction is that bear hunting challenges my skills in every way possible. Scouting, planning, stalking, stealth, woodcraft, shooting–everything. It all comes into play when you’re bear hunting.

I’ve hunted them about every way you can. In spring I run bait stations near my home in Alaska. While many of my friends are off chasing turkeys somewhere in the Lower 48, I’m scouting new bait sites or spending time spot-and-stalk-hunting bears on the steep, vibrant green mountainsides. I’ve endured bad weather and rough seas boating on the Alaskan coast, spotting bears as they gorge themselves on everything from fresh grasses to carrion. In fall, I always spend at least a week hunting bears–usually the technique is spot-and-stalk again, but sometimes I’ll be following the sound of hounds as they chase bears up, down and around the steepest, thickest terrain imaginable. One thing I can definitely say about hunting bears: It’s not boring!

Population Explosion
Black bear populations are on the upswing across North America. While counting bears is anything but an exact science, estimates put the number at 902,000, with 512,000 in Canada and 390,000 in the U.S. That’s a huge increase from the estimated total of 550,000 bears in the U.S. and Canada in 1977. And they’re showing up in places where bears never were before. Maryland, for example, now counts some 200 bruins. Nevada reports an increase from 24 in 1977 to 300 in 1992; North Dakota from none to 250; even Oklahoma has gone from zero to 25. California’s numbers have also skyrocketed.

There are several reasons for this growth. Improved habitat is a major one. But so is a shift in attitude toward bears: It has gone from allowing the wholesale killing of bears during the height of the fur-trade era in the 19th century to classifying them as “varmints” with bounties on their heads, to designating them in all states as a big-game animal with restricted seasons and controlled harvests. The establishment of protected parklands in the late 19th and early 20th centuries–among them Great Smoky Mountain National Park, Everglades National Park in Florida and Adirondack State Park in New York–also gave bears places where they could flourish. And flourish they have.

Odds for Success
Fall bear hunting is, as they say, the same, only different. It all depends on where you are. But no matter how you choose to hunt bears, it will be more challenging than deer hunting. Pennsylvania, for example, is a state with a reputation for good bear hunting. Yet there are only an estimated 8,000 bears in the Keystone State, compared with more than a million deer. Gary Alt, a Pennsylvania wildlife biologist and nationally recognized black bear expert, cites a survey of his state’s hunters disclosing that 13 percent of successful bear hunters killed the first black bear they had ever seen in the wild. Moreover, only 53 percent of the surveyed hunters had seen more than six bears in their entire lifetimes–which in many instances included trips to places such as Yellowstone National Park. The point is, if you don’t have a game plan and knowledge of local bear habits and haunts, you might as well spend your time looking for a four-leaf clover.

The Food Factor
Regardless of where you hunt, remember one thing: A black bear is a large, furred food processor. Its movements and habits are largely dictated by an insatiable appetite. Not only that, but black bears tend to concentrate on specific food sources at specific times. Generally speaking, their preferred fall food sources are berries, mast crops and fruits, though you can add migrating salmon to the list if you hunt coastal areas in the Pacific Northwest and Alaska.

Your first step as a hunter should be to call a state game biologist and ask about the preferred foods in the area you plan to hunt. In many mountainous western states, for example, huckleberries draw bears like magnets. In California and Oregon, I’ve watched bears tear up manzanita patches and almost knock down laurel trees to get at their berries. In the Southwest, black bears eat acorns like candy and routinely flatten large patches of prickly pear cactus. In the East, acorns are a key food source, along with beechnuts, chokecherries, hazelnuts and black cherries. Fruit orchards, especially apples, also draw bruins, as does skunk cabbage.

Keep in mind that bears do not act like deer. That is, when one specific food source has been depleted, they’ll move on until they find another. While deer may use an acorn ridge for a month, bears may be on it a week or less before leaving. Bears are very mobile animals, too. Alt’s research shows that some males will use an area as big as 60 square miles as their home range, moving all over it, looking for food. Females in the study generally confined themselves to 15 square miles.

The Value of Scouting
Anyone who takes a black bear without scouting ought to buy a lottery ticket. If they’re that lucky, they’ll probably win $200 million. To give yourself a realistic chance at getting a black bear, don’t look just to food sources; also keep an eye out for scat, tracks and signs of feeding activity–such as overturned rocks, dug-up ant-hills, decaying logs that have been torn up and places where bears have literally ripped branches from trees to get at the nuts. If possible, also ask local sportsmen questions about recent bear sightings, areas where bears are seen from year to year and so on.

In the Southwest, I often scout for deer and bears during the summer. While I glass early mornings and late evenings for deer, I’ll spend the middays checking out oak groves and cactus patches. If I find trees with limbs torn off during the previous fall, I can be reasonably sure that bears will be in the area when these same trees produce next fall’s nut crop.

Hunting Tactics
Bears move primarily at night, though you can catch them out during the day if they’re not heavily pressured. I’ve found that late evening is by far the best time to take a bear. Bears prefer to travel just before dark, feed at night, then retreat to the nastiest, thickest stuff around to bed for the day. Swamps, cool, timbered ridges and overgrown clear-cuts are where they most like to bed. Stationing yourself between a bedding area and a food source is a great way to get a shot.

In the inter-mountain West, I like to pick a spot where I can see a lot of country, and then glass. Forget about looking for bear sign, though. If there’s food around–berries, nuts–and it’s a good bear area, sooner or later you’ll spot a bear. Look mostly along the edges of timber and thick brush. In the thicker country of the East and Midwest, scout and find sign, then hunt it as you would a deer, stillhunting or taking up stand in a good-looking area.

Never underestimate a bear’s sense of smell. You must get the wind right, or forget it. I’ve had bears smell me at half a mile and bolt as if hit with an electrical shock. Always approach the core of your hunting area and take your spotting station from downwind. Bears also have excellent hearing, so wear quiet clothing, try not to make any strange noises and take pains to quietly stalk in for your shot.

A black bear’s Achilles’ heel is its eyesight. Though it is poor by our standards, don’t assume it’s Mr. Magoo-like. While I’ve had bears see me at 100 yards, if you wear drab clothing and don’t move when they’re looking your way, chances are they won’t figure out what you are.

Regardless of your weapon, try to take any bear through both lungs. I’ve never seen a double-lunged black bear go more than 100 yards. Aim to place your bullet or broadhead behind the front leg. Bears have thick hides and lots of fat and don’t usually leave much of a blood trail to follow. If your shot placement is a bit off, be prepared for a long and difficult tracking job.

When you do everything right, however, and finally get a thick-furred 200-pound-plus bear on the ground, you have every right to be proud, because you’ve done something that few other hunters have: taken one of North America’s true trophy animals. You may even have become addicted.ugh both lungs. I’ve never seen a double-lunged black bear go more than 100 yards. Aim to place your bullet or broadhead behind the front leg. Bears have thick hides and lots of fat and don’t usually leave much of a blood trail to follow. If your shot placement is a bit off, be prepared for a long and difficult tracking job.

When you do everything right, however, and finally get a thick-furred 200-pound-plus bear on the ground, you have every right to be proud, because you’ve done something that few other hunters have: taken one of North America’s true trophy animals. You may even have become addicted.