Early weaning is a key to getting your pup's full attention during training. 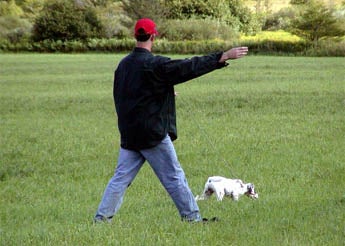 We all know you can’t train a puppy in the presence of its mom, because it pays attention only to her. Imagine how much easier training would be if you could magically become your pup’s “mom.” Well, Dennis Hermesch, DVM, is doing just that with his German shorthair pups by weaning them at 4½ to 5 weeks and becoming their whole world. This timing catches pups in the early stages of an enormous spurt of brain growth, but it’s at a point where they’re still heavily dependent on Mom to direct the neurons into making the right memory connections.

“I held back a pup weaned at five weeks for more training,” Dr. Hermesch told me, “then turned it loose in a fenced pasture with its mother and another adult dog at eight or nine weeks. It didn’t revert to seeing its dam as Mom, but paid attention to me. This attention transfers to new humans who pick them up at six weeks.”

Dr. Hermesch’s pups easily imprint on him because their real mom served only milk, while he delivers a quality soft food three or four times a day. They’re out of the kennel and in the backyard, a new world. And they’re played with and petted like never before.

A more serious play game, a wing on a string and pole, appeals to their instincts. They chase, they can’t catch, and finally one stops and points. Others soon follow the lead. When the new owners come to get them, all are pointing, sometimes all at once. Apparently, the instinct to “back” or honor another dog’s point is being expressed and set in stone as well.

These pups are separated from the dam and the litter a week apart, which is much less traumatic than experiencing both events on the same day. New owners report less nighttime crying.

Window of Learning
Each pup goes to its new home accompanied by a copy of my book Speed Train Your Own Bird Dog. Dr. Hermesch says he chose it because it trains by appealing to pups’ natural instincts. Training must continue at once because this burst of surplus neurons does not last long. Nature decides that sufficient time has passed to connect enough circuits to function in life. A gene switches on and orders the production of enzymes that destroy surplus neurons and the weakest synapses.

In humans, the brain’s greatest growth spurt is over by age 10.

A yearling dog compares to a 15-year-old human in potential maturity, so mathematically the window of time to appeal to a dog’s brain spurt is 8 months. Like humans, dogs can learn all their lives, but the rate and ease of assimilating information depends a lot on the number of circuits connected during the brain spurt.

In my view, Dr. Hermesch has discovered a landmark addition in the making of superdogs. Buyers say his early weaned shorthairs are exceptionally easy to train, and that they automatically carry the mom attachment to the field, never self hunting, always in touch with “Mom.”

**AT LAST! **
Oh, how I wish the Scout’s Seat Saver, and the headrests to buckle it onto, had existed when I was a teenager trying to protect the backseat of my parents’ car from wet, muddy, sometimes skunked dogs. This 1,000-denier fabric resists nearly all messes dogs carry in from the field. ($40; 800-505-8888; duluth trading.com)

Quick Tip>>
A study showing that country children have fewer allergies than city kids suggests that early exposure to dogs and other animals is important in building strong immune systems.