A challenging still-hunt in the big woods of Pennsylvania could produce the deer of a lifetime. 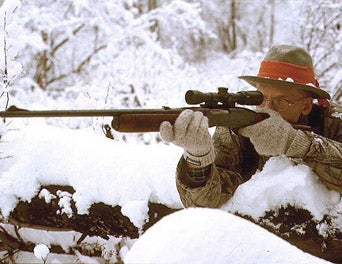 Some years the snow arrives later than others, but it always comes. Slowly the flakes begin to fall, a few here and a few there. Eventually they pile up, transforming the steep hills off U.S. Route 6 in north-central Pennsylvania from a dull brown to a brilliant white. The rugged Potter County mountains that only a few hours earlier looked rather drab in their earthen coat grow hauntingly beautiful, fitting of their place in an area the locals call “God’s Country.”

For some, the first signs of winter are a time to curse the long, cold months ahead. Many deer hunters, however, have a much different take on the frozen precipitation. The fresh blanket of white carries with it a sense of renewed hope and enthusiasm. The added visibility that a snow-covered background affords makes even the most pessimistic of sportsmen say, “Today things will be different; today will be my day.”

Let’s face it, there’s nothing quite like still-hunting or following a set of deer tracks across a snow-covered landscape. It’s a truly exciting way to pursue whitetails, and in Potter County there’s plenty of room to do so.

For those who relish wide-open spaces, the place to start is the Susquehannock State Forest, a 265,000-acre public parcel spanning the southern half of the county. Part of the region’s Big Woods, this large, rough land is filled with scraggy ridges, deep hollows and flats simply begging to be explored.

While there are plenty of roads traversing the Susquehannock, it also features an extensive network of hiking trails-hundreds of miles in all-that lead deep into the forest, to places so out of the way you might never see another hunter. It’s in these isolated locales that you will likely encounter your best chance of tagging a trophy, especially as the hunting season progresses.

Early-season pressure from sportsmen congregated near roads often forces the deer to retreat deeper into the woods. Getting into the more remote spots can put you close to a few of the big boys, mature bucks that are all but certain they’ll make it through to next year.

Stalking Challenges
Still-hunting the Susquehannock-or any dense forest for that matter-isn’t easy. It requires plenty of patience, determination and alertness. Although the snow cover helps boost visibility tremendously, it’s still crucial to scan the terrain as meticulously as possible, looking for anything that seems out of the ordinary-a small patch of brown that doesn’t quite belong or a branch that seems to reflect the sun a bit too much. You just never know when that sapling or rock you’re looking at will, in fact, turn out to be a Potter County trophy. And that could be the buck of your lifetime.

Bag limit is one buck and one doe with each valid antlerless deer license.

[pagebreak] Steps for Tracking
Hunting a trophy buck in the Big Woods by following a set of tracks in the snow is one of the toughest challenges in deer hunting, but it can be done. The first step is to make sure you’re on a fresh trail made by a mature whitetail, something that isn’t as easy as it sounds.

Maine master guide Hal Blood, who has 25 years of experience tracking big bucks, says the key to determining a track’s age is to look at the edges where the deer broke through the snow and see how crisp and sharp they are. “Within an hour, they’re going to start rounding off,” he says.

Of course, weather plays a big role in how old a track looks. According to Blood, trackers should consider the current and overnight temperatures, as well as whether or not it snowed recently.

When trying to assess whether a track was made by a big, old buck, examine it’s width as well as its length. Blood likes prints that are at least 3 inches long by 3 inches wide.

Blood also studies the deer’s dewclaw marks, the length of its stride and the width between his left and right hoofprints. All whitetails can leave dewclaw marks, but the longtime guide notes that those on a mature buck will set back farther than those of other deer and be fairly far apart. “If they’re as wide as the back of the hoof or wider, it’s a decent buck,” he says.

Another indicator of buck size is a whitetail’s gait. A long stride means a potentially heavier deer. “You like to see twelve inches in width between the prints,” Blood says, noting that the figure applies to the 200-plus-pound bucks he hunts in Maine.