Pump up your fall hunt by running a turkey dog. 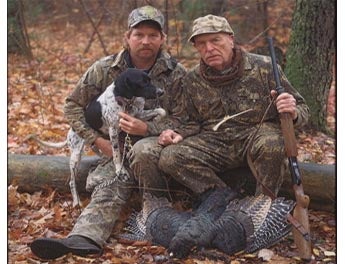 “There goes Patches,” yelled Larry Case of Fayetteville, W.Va. One minute Larry and I were trailing along behind his turkey dog on a civilized stroll through the autumn woods. The next minute, chaos.

Patches, nose to the ground, veered off the old logging road and went straight up one of the mountainsides that characterize the state’s rugged topography. A minute later, we heard a single bark, followed by the flapping of wings. A few seconds more, and three turkeys soared over us to our left. Two more came winging by to our right. Last, four birds flew directly over us.

Larry and I hurried up the mountain and easily located the bench where the bust had occurred, since fresh turkey scratchings littered the forest duff. After about 15 minutes, I started with a lost call, the sound of a separated young turkey. Almost immediately, the woods began to sing with the voices of jakes and jennies responding in kind.

“Here they come,” hissed Larry, with Patches between his knees. The lead jake was so eager to come in that he ran past us, but the jenny paused. That was her undoing; I sent a load of No. 4s her way. A good turkey dog is aggressive and well-trained. They must be able to lie still when birds approach. I’ve hunted with everything from Labs to Chessies. In West Virginia, residents use a mixed bird dog called a fyce (often called a “feist” elsewhere), a small, yappy dog with a strong nose. West Virginia’s turkey season begins October 22.