Want to fill your tag on opening day? Here's how to make all the right calls. 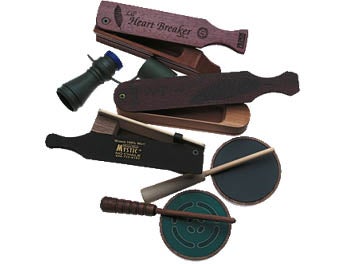 With all the demands on our time, it’s easy to let the opening day of turkey season catch us unprepared. But don’t let the first days, potentially the best for catching unwary birds, slip by while you perfect your calls. Just as athletes prepare for their first game months before the opening whistle is blown, a turkey hunter needs to practice if he hopes to make that first call of the season irresistible to a gobbler.

Get Started Now
For two-time Grand National calling champ Chris Kirby, practice has no beginning and no end. “Practice can never be over. It should be something a guy does all year long if he wants to make every call in the field with confidence,” says Kirby, who is also president of Quaker Boy Game Calls. If you’re not going to work with your calls year-round, at least begin practicing several times a week two months before the season starts. Two weeks before the opener, practice at least 30 minutes each day.

But first, dig out all your old calls and give them a close inspection. Toss any calls that are cracked or chipped or have worn and wrinkled reeds.

“This is a good time to buy three or four types of calls so you’re not limited to one particular sound,” Kirby says. “If you go out there during the season able to make only one sound and a turkey doesn’t gobble to it, you’re stuck.” At the most basic level, a turkey hunter should be well versed in working a box call, a slate (or pot and peg) and a mouth diaphragm. Other options include the easy-to-use push-pin or, for more advanced users, tube calls and wingbones.

Run a Box
“I think a box call sounds most like a real turkey. If you’re inexperienced, work first with a box call,” says turkey hunting veteran Ray Eye. First make sure the lid and rails where sound is produced are free of grime. Then chalk the box along the full length of the lid.

Hold the call by the bottom, not the sides, as this deadens the tone. Also, never touch the sound-producing surfaces with your fingers. Skin oils can damage the call. Whether you hold the lid handle toward you or aimed up doesn’t matter. In fact, try it several ways to see which works best for you. To tune the call, adjust the screw holding the lid, one turn at a time. You want it to make a clear, raspy yelp. Never lift the lid from the box while calling, but try applying different levels of pressure to produce varied tones.

Work a Slate
Pot and peg calls, or slates (as they are commonly referred to regardless of what the calling surface is made of), produce excellent cutts and purrs. By combining pots that have different surfaces with pegs of varying materials, you can create a broad range of tones and pitches. Keep the calling surface clean of dirt and oils. Prepare the surface with a conditioning stone or light-grit sandpaper.

Hold the striker like a pencil in the hand you write with, with the top angled away from your body. To produce a yelp, work the striker in small circles, keeping it in contact with the slate the entire time it is moving.

Get Mouthy
While more challenging to learn than a box or slate, a mouth call allows a hunter to make the entire repertoire of turkey sounds and keep his movement to a minimum. It also works well in any weather and is relatively inexpensive. The average diaphragm can be bought for around $5.

Don’t waste time with single-reed calls. They lack rasp. Try a multi-reed call. For maximum raspiness, go with a call that has three or four layers of latex and a cut in one of the layers.

The call should fit snugly against the roof of the mouth to create an airtight seal. Though some hunters bend their calls or trim the tape from around them for a better fit, Kirby says most calls will fit the average hunter just fine. If you trim the tape, do so a little at a time.

“Once you have the call in your mouth, mmove it around as you’re calling to get the full range of sounds the call can make,” Kirby says.