How and when to duplicate the odd sounds moose make. 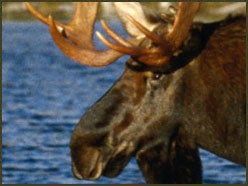 Somewhere back in time I remember sitting at the edge of a beaver dam swamp waiting for an elk to show up at a wallow. The noise I heard from the alders was strange, sort of an animal coughing sound; I had no idea what was making it. Suddenly a bull moose appeared at the edge of the willows, walking along briskly and making a series of consistent grunts. I didn’t realize it then, but the old boy was in the rut, looking for a lonely cow.

You would think that an animal as big as a moose would have a great big hearty voice, far surpassing that of a bugling bull elk or roaring red stag. But that’s not the case. His grunts are not easy to hear-in fact, if you don’t know what to listen for, you might not hear them at all, even if the animal is close. Many times I’ve pointed out the sound to companions who thought I was crazy but changed their minds when they finally heard the moose or saw it. Trying to describe the sound with printed letters is a waste of time. How about this: ouuahhhh, or unghhhh. Does that make any sense? Do you now know, unequivocally, how that sounds in real life? I don’t think so. A cow moose makes an entirely different sound. If you’re in your sleeping bag on a quiet night and a cow sounds off, you’ll be scared witless if you don’t know what it is. It’s a long, hair- raising moan, a quavering wail that can last as long as 15 seconds or more. As hard as these calls are to describe, however, imitating them under the right conditions in the field can be a deadly tactic to lure in a lovesick bull.

The best way to become familiar with a moose call is to listen to a live animal. You’ll need to be out there during the rut, which is the latter part of September and the first week or so of October. Hearing a bull is far easier than hearing a cow. In all my years in woods inhabited by moose, I’ve heard only two cows. Many experienced hunters have heard none. If you can’t make it to the moose woods, there are videos and cassettes you can listen to, such as wildlife biologist Vince Crichton’s CD, Moose Music (204-663-9970; doc.moose@shaw.ca).

How to Call
To call a moose, you can make the grunt call, the cow sound or a combination of both. Unlike deer or elk, which hang out in small groups or herds, moose are solitary. During the rut a bull might walk many miles each day to find a suitable cow. When he does, he might stay with her until she’s in heat or wander off to find another. That being the case, you’re likely to hunt a lot of country with no bull moose within calling range.

One of the finest calling demonstrations I’ve witnessed took place during a recent hunt in British Columbia with outfitter Darrell Collins. Using the cow call, Collins called in seven bulls in three days. I killed the seventh bull, which took more than 30 minutes of coaxing on Darrell’s part to bring in. Collins made the call by pinching his nostrils closed with the fingers of each hand as in a praying position.

Darrell waits far longer at each setup than most callers do-sometimes an hour, if he’s confident of the area he’s calling into. Most callers I’ve been with give it 20 minutes or so and move on. Unlike a predator that dashes straight to a call after hearing it, a moose might wait some time before advancing.

Darrell calls every 10 minutes or so, using a very long, drawn-out cow moan. One bull was just a speck on a ridge when we spotted it and had to be a thousand yards away. At first I’d have laid a healthy wager that the bull was not responding to Darrell’s call, but then the big animal trotted straight toward us. It stopped a mere 20 yards away when I stood up and waved my arms at him. He wasn’t what I was looking for, though he provided some comic relief as he glared at us with a 4-foot-long spruce bough stuck in his antlers.

Bull grunts are also used to challenge other moose. This is a territorial thing, or it might incite bulls because they believe a cow is close by. I’ve had good luck calling bulls by grunting. During a Colorado hunt a few years ago I called in three bulls. All of them came in at a fast walk, grunting nonstop as they moved along. When I grunt, I call every five seconds or so, keeping it up for a minute. Then I listen very quietly for 10 minutes. Unlike the loud and long cow moose call, the grunt doesn’t carry as far, and if a moose isn’t within earshot it obviously will not respond. You can call “blind,” or you can do some scouting and call where you find fresh sign. A disadvantage of the latter is the difficulty of penetrating moose country, with its swamps, ponds and thickets of willows and alders. It’s often a waste of time to traipse through this cover; it’s usually better to try your chances calling from the outskirts of this prime habitat, where you can move more freely. Some places seem to scream moose, such as beaver ponds surrounded by acres of dense willows, especially if the wetland is hemmed in by heavy timber. Chances are good that a bull moose is hanging out in or around the marsh, but in his zeal to find cows, he will travel extensively. Be mobile and hit as many places as you can.

The ability to call moose isn’t really important if you’re hunting with a guide, since he’ll do the calling. In Canada, an outfitter is required for American hunters. In Alaska and the mainland U.S. you can hunt on your own, except in Wyoming, where nonresidents must have a guide in a wilderness area. In that instance, few hunters would venture into the wilderness on their own because of the need to transport the carcass. There are plenty of places in Wyoming where you can hunt in non-wilderness country close to a road and see plenty of moose. Getting a moose tag in the Lower 48 is tough. You must draw a tag in a lottery, unless you can afford the landowner tag offered in some Western states or are high bidder for an auctioned tag. Both of these alternatives are expensive, easily reaching into five-digit figures. A moose that responds to your call doesn’t have the vocal charisma of an elk, and it doesn’t have the sleek appearance of a handsome whitetail buck, but I can assure you that the incoming animal will thrill you to no end. To some of us, a bull moose is downright pretty.