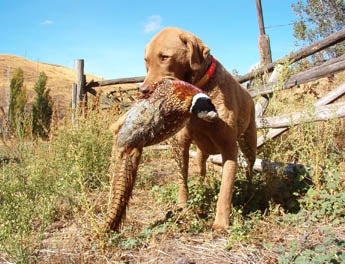 There’s an old saying: “The fun of the hunt is over when you pull the trigger.” The message, of course, is that after the shot you must begin the laborious process of packing the animal out. If you have a moose down, you’d better have some pals with strong backs, or horses, to help. In the case of a vest full of small game, the packing out isn’t much of a problem, but the chore of preparing the meat for the table begins in the field.

Rabbit and Squirrel
I’m a firm believer in skinning and dressing a squirrel or rabbit as quickly as possible after it expires, especially since rabbits can carry fleas. Once the animal starts cooling down, the fleas emerge to find a more receptive host, which might mean you if you’re in contact with the animal. Another reason to dress an animal quickly is that it’s a whole lot simpler. Fur peels far more easily from a warm animal than it does from one that’s been in your game pocket for several hours.

I use game shears to cut the legs off at the joints, then I snip off the head. A crosswise cut just under the skin on top of the back allows me to insert my fingers under the skin on each side of the cut and pull in opposite directions. The skin will peel away in two pieces. Next, use the shears to open the cavity and remove the entrails. To keep the carcass clean, wrap it in a square of cheesecloth. (Keep a package of cheesecloth in your pocket and cut it as needed.)

If there’s snow on the ground, I’ll bury the carcass in the snow and mark it so I can find it a few hours later. If the hunting is good, I’ll accumulate several carcasses and bury them together so I don’t have to search for singles. In the absence of snow, put the carcasses loosely in your game pocket and they’ll begin to cool immediately. The object to proper dressing, whether you’re dealing with a bird, a small mammal or big game, is quick cooling. If I’m hunting in a camp or staying in a motel, I’ll put the carcasses in a cooler full of ice.

[pagebreak] Upland Game
Birds should also be quickly dressed, but be sure you know the laws regarding species identification. Most states require you to leave the head or one fully feathered wing attached to each carcass. Many hunters prefer to “breast” the carcass and discard the wings and legs. Be sure the law allows you to do that. I’m not a fan of breasting birds. I enjoy the legs and wings, even on a bird as small as a dove or quail. I believe the extra work is worth it. As with small game, I’ll pluck or skin my birds when they’re still warm, if possible. This is especially true of birds with “tough” feathers, like geese and turkeys. Plucking a cold, stiff goose is an ordeal I prefer to avoid.
I simply cut the wings off at the mid-joint and the legs off at the knee joint, leaving a whole wing on if the law requires. After that I’ll remove the head and pluck or skin. Next I’ll make a small slit below the breastbone, insert two fingers into the cavity, pull out the innards and rinse out the cavity.
It’s often difficult to clean your birds while you’re working a dog in a field or hunting waterfowl from a blind. Usually you’re too distracted. It’s far better to deal with the birds as soon as you’re done hunting. You can let the field-dressing chore for birds go a day or so if the air temperature is cold, but the quality of the meat will suffer. You should never allow small-game animals to go undressed overnight.
Turkeys Turkeys are typically breasted, but I love the legs and wings. My buddies have seen me digging around in garbage cans, pulling out fresh carcasses and removing the wings and legs, which include both the thighs and drumsticks. This meat is dark and tough and can have a slightly wild taste if prepared with no seasonings. I cook the legs and wings in a crock pot, along with a sliced onion and some salt, until the meat is ready to fall off the bones. Then I’ll separate the meat froom the bones, cut it into chunks, and add it to a pot of cooked vegetables, including celery, carrots and more onion. Finally, I’ll add my favorite spices, let the stew cook a bit more and serve it with noodles or over rice. I’ve converted many people who previously kept only the turkey breasts.

Dealing with fowl and small animals is part of the hunting experience. Any extra preparation you do to make the meat more palatable will be immediately noticed at the table.

[pagebreak] Getting It Home **
On a recent turkey hunting trip in Texas that preceded the NRA convention in Houston, I killed two turkeys and removed the breasts, wings, thighs and drumsticks. The challenge: How to keep them chilled until I could get them home. Here’s how I did it.
**1. Zip Them Up I put the pieces in ZipLok bags and placed them in a cheap Styrofoam cooler with plenty of room for ice.
2. Cool Them Off During the convention, I put the cooler in the bathtub of my room and kept it full of ice. (Cheap coolers tend to leak.)
3. Use A Cooler **To take the birds home, I discarded the Styrofoam cooler, put the thoroughly chilled meat in a smaller, collapsible cooler, put ice on top and zippered it shut.
**4. Carry Them On On the three flights home, I carried the cooler as carry-on luggage, keeping it in the overhead compartment. When I got home, the contents were still well chilled and in perfect condition.

**Gerber Game Shears **
A simple way to clean small game and birds is with the help of game shears. Gerber’s new Take-A-Part shears are light and strong and come apart easily for quick cleaning. ($17; 800-950-6161; gerberblades .com)