You can relive this exciting hunt of the past in lots of ways. 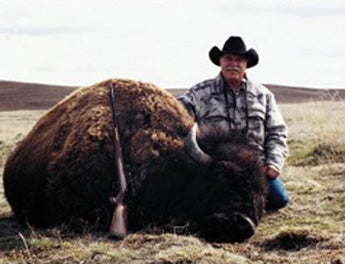 A herd of 50 buffalo grazed about 600 yards away. I was feeling pretty smug about my chances of success because buffalo aren’t supposed to be terribly wary. Imagine my surprise when the wind shifted and the entire herd took off in a cloud of dust.

I ran as fast as I could and managed to cut them off as they crashed through sparse pines. The herd passed within 50 yards and I picked out the biggest animal, which flanked the herd on my side. With the dot reticule of my scope aimed at a point just behind the shoulder, I touched off the Winchester Model 70 .30/06 and watched as the buffalo continued charging along with the rest of the herd. Moments later it teetered, slowed and fell to the ground. I was hunting in the Henry Mountains of southern Utah, where a truly wild herd of buffalo lives in a large, rugged area. No fences surround these animals, and much of the time they live on public land.

I had overcome high odds and had drawn a permit in a lottery after many years of applying. My hunt was a once-in-a-lifetime opportunity; once a tag is drawn, you can never apply again. Chances of winning a tag in that enormously competitive lottery are tough. But if you really want to hunt buffalo, there are other ways.

Where to Hunt
By far, most buffalo are hunted on ranches. These are animals confined by fences, simply because they must be contained and prevented from roaming at will. Some are kept in enormous pastures of tens of thousands of acres; others are in smaller parcels.

Last year I hunted another buffalo, this time with the Canyon Crest Hunting Club (888-235-5211) on a 16,000-acre ranch in eastern Washington. The owners wanted me to take a rogue buffalo that had been wrecking fences and wandering about.

Using a Remington Model 700 in .375 H&H;, I managed to take the old bull, which weighed close to a ton. My experience hunting buffalo on public and private land, and observing them for years around the West, has convinced me that the spooky herd I hunted in Utah was an exception to the rule. For the most part, buffalo are fairly docile animals. They fear nothing and often stand boldly in the presence of humans. Historical accounts of buffalo during the years of colonization and settlement suggest that the animals have always been tolerant of people. Little has changed in their attitude.

Private-land buffalo hunts vary, based on the owner’s terms. On some, you’re allowed to keep the whole carcass; on others, you can take only the head and hide, but you must buy the meat at a prearranged price. Typically you’re offered a trophy bull, meat bull or cow. Costs for hunts vary widely, but a meat bull is usually two or three years old and weighs about 1,000 pounds. Meat-bull hunts run $1,000 to $2,000 or more. A trophy bull is at least five years old. These hunts command the highest prices, ranging from $2,500 to $4,000 or more. Cows are the cheapest-hunts cost around $1,000.

Shot Placement
There are two schools of thought regarding shots on buffalo. One is to hit the spine just behind the ear (a spine-shot animal will go down on the spot). The other is to take the animal through both lungs by aiming just behind the shoulder. The behind-the-shoulder shot is the easiest shot because the vital area is larger (18 inches by 18 inches), but a bullet striking the shoulder will destroy plenty of meat and may not penetrate. Take your pick.

Now is the time to hunt buffalo. There’s a surplus of animals and prices haven’t been this low in years. The meat is superb and nutritious, and a wall mount will stir memories of your hunt and remind you of the past, when millions of buffalo roamed the land.