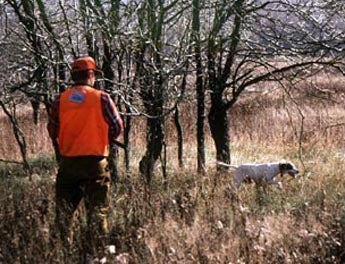 The best advice for handling willful, dominant dogs is to “become the pack leader.” However, one of the most effective ways to do that is seldom examined because it is a socially sensitive topic. Well, if movies, and now TV, can commonly verbalize the crude version without the slightest redeeming value, I suppose I can discuss the subject politely for good and sufficient reason.

I’m talking about how a dog understands his place in the world by the odors other dogs leave and how high they can scent a post. The act of expressing dominance through urine is a potent instinct in the canine world. Generally it’s limited to dog vs. dog situations, but occasionally it goes beyond. A trainer friend of mine took his Irish setter and a client hunting. After the client missed his 14th quail in a row, the dog showed his disdain by cocking his leg and filling the hapless hunter’s boot.

Who’s the Boss?
Clearly, this strong interest in communicating with urine makes scenting a powerful canine behavioral training tool. Women, in particular, have told me that their male dogs believe they’re the boss. A dog’s nose does inform him of biological differences in humans, and some male dogs do believe they can dominate female owners. So far, no women have been offended when I’ve told them that some dominant dogs cock their legs on subordinate canines or those they want to mark as “theirs.” Nor have they been insulted by hearing that doing the same to the dog is quite a surprise, very inhibiting and the quickest route to alpha status. Whether it’s a man or a woman, the simple method is to collect specimens as needed and pour them into a clean garden spray bottle that is free of other odors.

During his terrible twos, Peat, my friend Dan Thomason’s male Gordon, began snarling territorial warnings at Dan’s wife, Karen. I suggested she spray the dog’s head and shoulders with her urine, and after a few squirts they became fast friends.

Later, Dan sold a pup that found no leadership in his new home, so the dog took over. Eventually, he’d snap at anyone who came close to “his” sofa. Not respecting his owner, he’d take off self-hunting, sometimes for hours. Dan thoroughly scented a pen and invited the dog back for training. The dog rescented every post, so Dan promptly scented over the dog’s marking and higher. In two weeks, the contest had ended; the dog was hunting cooperatively with Dan. After receiving advice on behaving authoritatively, the owner took the once-domineering dog home, where it became an obedient, happy hunter and member of the family.

Firm Follow-Up
Higher scent posting opens the door to respect as pack leader, but making that respect permanent requires firm obedience training. Persist until your formerly disobedient dog will come, heel, sit-stay or whoa, even in the presence of distractions like cats or other dogs.

In the process, behave authoritatively by not asking or discussing but firmly giving orders in one or two words. Give no order that a disobedient dog can ignore. Make sure you’re in control with a check cord, ground cable or e-collar. From now on, this dog sits until invited out of the kennel, told to load in the vehicle or ordered back into the kennel. Commands are sit, come and get in. While he sits in preparation for heeling, stand close to and over him longer than usual. Squat next to him often and place your arm over his neck. Sometimes grip the top of his muzzle. Frequently hand-feed him to maintain dependence. All of this is very controlling in dog terms. But if you do it kindly yet steadfastly, that willful dog will acquiesce. You’ll be best buddies in the field.