Having other hunters in the woods can help you this fall. 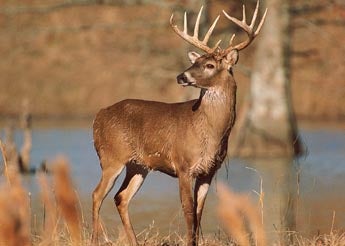 Standing on a ridgetop 150 yards away, the bighorn sheep offered the perfect shot. I knew this hunt would be history as soon as I pulled the trigger. My rifle was rested on shooting sticks, the safety was off, and the crosshairs were steady on his chest. I was just beginning my squeeze when suddenly a shot that wasn’t mine rang out. Dumbfounded, I saw another hunter’s bullet strike high over the ram’s back. I had absolutely no idea anyone else was in the area. Then I looked down and saw a man about 400 yards away. He fired again and missed a second time. The ram finally had enough and made his escape in the nearby timber. It was competition at its best-or worst.

Recently I was working a spring gobbler. A longbeard came in hard and fast, double-gobbling every time I called. He was about 45 yards out when he suddenly stopped and turned 90 degrees. He walked laterally for a few more seconds (farther than I wanted to shoot) and then crumpled in a heap when another hunter shot him. I had no idea the man was sitting under a nearby tree. As he explained later, he saw me sit down in the dim light of early morning and immediately start calling to a gobbler. The bird came in so quickly the hunter didn’t want to make a disturbance, so he just sat there silently, assuming I’d shoot the turkey. As it turned out, a hen appeared behind him. This caught the gobbler’s attention, and the tom walked right into the hunter’s lap. Another profound case of competition.

In both instances there wasn’t a thing I could have done to prevent the outcome, since it was a matter of poor timing and bad luck. I was hunting public land, where we all try our best to punch a tag before the next person does. That might sound mean and inconsiderate, but it’s reality. The best hunting is where there are fewer hunters. We do everything we can to get away from other people, and we’re upset when we arrive at our favorite spot and see someone else’s pickup truck parked nearby.

For many of us, however, there is no choice. We hunt public land because we can’t afford to pay to hunt or have little or no access to private land. We camp amid an army of people, hoping we’ll be the lucky one who will tag an elk or deer in the morning. As we set out in the pre-dawn darkness, we try to be the first out on the ridge, down in the valley or wherever we think the animals are. If we spot a herd of elk in a meadow before the season opens, we pray that no one else has seen them.

[pagebreak] **AVOID COMPETITION **
You can get away from other hunters by hiring an outfitter, paying a lease fee or drawing a tag in a limited-entry unit. But if you aren’t able to swing the first two financially and never win a lottery drawing, you just have to learn to hunt smarter on public land. Which might mean you have to get physical.

Are you hunting a road closure area where a gate blocks the road? If so, get there two or three hours before other hunters and set out hiking in the dark. Look at it this way-you can sleep late anytime. When you hunt, make the most of every hour. More than once I’ve parked at a gate at 3 a.m. and started hoofing it long before anyone else pulled up in his truck.

Are you leaving camp when the eastern skies are just turning gray? If so, you’re too late. You need to be at your chosen spot long before darkness starts to fade. Forego the warm sleeping bag and third cup of coffee. If nothing else, be at least a few hundred yards into the woods when hunters begin arriving.

Do you hunt close to trails and roadways? So do most other hunters. Get a good map and a compass or GPS and strike out into the woods. Penetrate deeply enough so you’ll leave other hunters behind.

Do you leave the woods before legal shooting hours are over because you want to be out of there before it gets dark? Well, you can count on most other hunters doing the same. Animals seem to sense the absence of people and begin moving to feeding areas at the end of shooting light. They lie in their beds all day chewing and digesting their food. By late afternoon they’re anxious to begin feeding again. You’re missing out on the best time of day by leaving early.

**USE OTHER HUNTERS **
If you aren’t unnerved by other hunters nearby, use them to your advantage. Once I was on a Colorado ridge looking into an opposing aspen-covered slope when I saw five hunters walking toward the slope. I quickly descended and positioned myself a half mile away in the bottom of a steep draw that fleeing deer would use to get to escape cover. I shot a nice muley that had bypassed the other hunters. I talked to them later; they never saw the buck that prematurely bolted out of the cover they’d entered.

[pagebreak] When I hunt whitetails in Iowa, my favorite stand on my buddy’s farm is within 100 yards of his neighbor’s fence. Invariably a dozen hunters on the adjacent land will push deer toward heavy cover on my friend’s land, and on more than one occasion they have pushed a buck right into my lap.

On heavily pressured public land, consider camping overnight deep in the woods with a lightweight tent and sleeping bag. When hunters leave their vehicles and head into the woods, you’ll be in the catbird seat, having an advantage over everyone else.

You’ve probably heard that the best hunting hours are between 10 a.m. and 2 p.m. That’s partly because other hunters are leaving their stands and heading for camp. Deer are moving then. Stay in place and be sure to wear adequate clothes to keep yourself comfortable when everyone else is cold.

**BE ETHICAL BUT SMART **
There are no written rules governing your behavior around other people. Treat them as you’d expect them to treat you. Like it or not, you will be sharing space in the woods with other hunters. Be fair, but be shrewd. Luck plays a big part, but often the smartest hunter brings home the venison.