Who would have thought it? U.S. Department of Agriculture (USDA) scientists looking for ways to control coyote populations in "sensitive" urban areas are taking a serious look atÃƒÂ¤birth control. 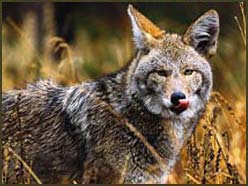 Who would have thought it? U.S. Department of Agriculture (USDA) scientists looking for ways to control coyote populations in “sensitive” urban areas are taking a serious look atÃƒÂ¤birth control. At present, there is no reliable coyote contraceptive, but USDA researchers are testing potential drugs.

In a parallel effort, other USDA scientists are working to develop scent attractants to ensure targeted delivery of whatever prophylactic their colleagues come up with. It’s not as easy as you’d think. “Coyote management requires specialized attractants to target the delivery of drugs and vaccines, and for the effective operation of traps,” says Bruce A. Kimball, PhD., principal investigator of the study and a chemist with the USDA’s National Wildlife Research Center in Fort Collins, Colo. “Attractants must provoke behavior that will make coyotes respond appropriately.” In other words, attractants have to bring coyotes to the birth-control dispenser and then make them roll and scratch in the substance, creating a delivery method for the drugs. Researchers have noted that different scents or combinations elicit different behaviors in coyotes. Some scents produce rolling, others rubbing or scratching, and so on.

The basis for some of the scents is sometimes strange. A lure scent in use by trappers since 1973, DRC-6220 or synthetic monkey pheromone, is based on a fatty acid found in secretions of the female rhesus monkeys. In an effort to develop simpler and more reliable fragrances to optimize effectiveness, Kimball selected 33 complex coyote attractants for chemical analysis.

Based on this analysis, seven promising-but-less-complex synthetic fragrances were made. Each new scent was tested among 28 coyotes — 14 male, 14 female — whose behaviors were recorded. Among the animals studied, female coyotes were the first to respond to the chemicals, suggesting the possibility of developing a delivery system that is both species- and gender-specific.