For coyote hunting, Nebraska and South Dakota are the states to be. The season in both states runs year-round, and there's no limit 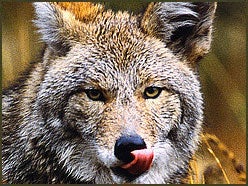 Randy Anderson of Butte, Neb., will never forget the first time he called up a coyote. He was 14 years old and was using a coyote call he had borrowed from his uncle. Randy called the coyote to within 10 yards and dispatched it with a lever-action .30/30.

“I was hooked from that moment on,” says Anderson, who has parlayed his love for the sport into a hot-selling video, Calling All Coyotes. His reputation is such that landowners from miles around in both Nebraska and South Dakota call him to solve their coyote problems, which means Anderson has no shortage of prime predator-hunting locations in either state.

Coyote season in both states runs year-round, and there’s no limit. Most landowners welcome coyote hunters, too. In South Dakota, all you need is a nonresident predator hunting license ($35). Nonresidents visiting Nebraska need a small-game hunting permit ($55). Anderson can give you some pointers on where and how to hunt. Public hunting lands are listed in the booklet that contains Nebraska hunting regulations, and Conservation Reserve Program (CRP) maps also are available from license agents. In South Dakota, just ask a license agent for a copy of the state’s Walk-In Atlas and Public Hunting Areas Guide and find your own hunting spot.