Many of the things hunters do when they are stalking cougars are exactly the things experts warn against when they talk about avoiding cougar encounters. 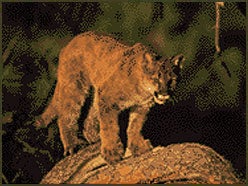 First one branch snapped, then another. A moment later a four-point blacktail charged out of the brush 20 yards to my right. He came straight at me, eyes bulging, muscles straining. There was no time to unsling my rifle; I barely had time to flinch. As the buck rushed past at arm’s length, I caught a sidelong glimpse of his wide eyes before my attention locked on his pursuer.

Less than 20 feet behind the frantic buck a gray-brown shape flashed through the rain. In an instant it was all crystal clear: I was standing between a charging cougar and its prey. The cat whipsawed around me and it and the deer were past, crashing into the heavy brush. For a few seconds I followed the sound of thudding hooves and crashing branches, then I was alone with the wind and the rain. I knelt and put my hand in the churned earth of their tracks — the only sign of their passing.

When I was growing up in western Montana, we sometimes had a fleeting glimpse of a cougar in the headlights or a flash of tawny brown along a logging road. That was all. Every few years an opportunistic hunter would bag an unlucky cat, but we were told (and believed) that cougars were rare, reclusive and no threat to humans.

The situation has changed, however. More people pursuing a greater variety of recreational pastimes in cougar country have generated a mounting body of evidence that the cats can and do conflict with humans on a regular basis. Given the amount of time hunters spend in cougar habitat, and considering that hunters and cougars are pursuing the same animals, it is not surprising that reports of conflicts with hunters are increasing.

In 1995, wildlife agents in one heavily hunted area of western Washington investigated four cougar- human encounters in a 10-square-mile area during the first week of modern-rifle deer season. They determined that one incident was poaching; the violator who killed the cat tried to cover his crime by claiming self-defense.

Another encounter resulted when one group of hunters spooked a cat into a second group of nearby hunters. The third encounter was more typical: A solo hunter walked into a cat waiting in ambush. The last, however, was an outright attack: A 152-pound male cougar took on a party of hunters standing in a road. Despite their attempts to frighten the cat away, it advanced menacingly until one of the hunters shot it as it crouched to spring. When killed, the cat was less than 10 feet from the group.

All of the cougars involved in the Washington incidents were large, healthy animals. A Montana study covering cougar-human interactions in that state in 1989-90 found that most of the attacking cats were two years old or younger.

None were in poor condition and three-quarters of the cats examined after attacks had food in their stomachs. Veterinarians say rabies and feline distemper would kill or render a cougar incapable of an attack long before the diseases would alter its behavior. Most of the cougars involved in cougar-human interactions are, according to the Montana study, “young animals of either sex in good health.” Not surprisingly, the study also indicated that nearly half of its reported encounters in the fall involve big-game hunters.

Cougars hunt deer and elk for a living, and we often employ the same tactics the cats use: slow stalking, setting up ambushes, creeping along the forest edge, keeping ourselves concealed. There is little other way for us to go about it, save for using a tree stand.

A few years ago I was deer hunting on the southern end of Washington’s Olympic Peninsula, an area with numerous mountain lions. In mid-morning the sun broke through the clouds, and I knew where I wanted to be: on a large cedar stump that overlooked a southeast slope so I could see over the surrounding brush and spot any sunbathing deer. A light snow had fallen earlier in the morning, and as II headed for the stump I noticed fresh cougar tracks going the same way. They led directly to the stump, and when I reached it, I found on its snow-covered top the perfect print of a cougar’s rump. Clearly, I wasn’t the only one who figured the rare sunlight would bring deer out of their beds and who knew how to exploit the situation.

Many of the things hunters do are exactly the things experts warn against when they talk about avoiding cougar encounters. You can’t hunt successfully if you’re making noise or walking with the wind. You can’t avoid occasionally stooping or squatting to read sign. You’re often on the move at dawn and dusk, primary cougar hunting hours.

Keeping your wits about you is the most important thing you can do to prevent an encounter because, like most predators, cougars target the easy mark — the unwitting prey. Be especially alert when you are cleaning a downed game animal. My father once looked up from gutting a Montana mule deer to find a large cougar creeping toward him. He waved his arms and yelled and the cat took off. After that he always kept his rifle close at hand when cleaning a kill.

Convincing any aggressor that you are more than it wants to tackle is the first and biggest step in winning a confrontation, and it is no different with cougars. Make yourself look as big as possible, stand tall, spread your arms, open your coat and speak loudly, teeth bared. Also, keep your eyes on the cat — don’t loose sight of its position and posture. Avoid stooping, squatting or bending. Don’t turn your back even for an instant. Never run. Cougars instinctively attack running prey.

You might say this article is alarmist, but I would like to think it is practical. Statistically hunters should worry more about falling, bad weather and insect bites than confronting a cougar, or any big predator for that matter. Yet we should not be all that surprised when we come upon a cougar’s tracks going exactly the way we want to go, one step ahead of us, as if the big cat had read our minds.