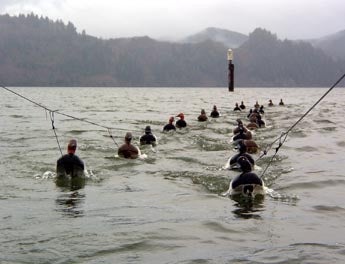 Walking down the icy boat ramp in our heavy waders, we moved with all the fluidity of astronauts in their space suits. Cautiously, we stepped to the bow of the open duck boat and dropped our gear atop the snow and ice that had accumulated along the vessel’s benches and controls overnight. Nine inches of snow had fallen on the tiny Maine village of Stonington, at the outer edge of Penebscot and Blue Hill bays.

Following a lackluster two days of hunting sea ducks, the nasty weather offered encouragement. Maine boasts some of the best sea duck hunting in the country, and we were eager to take part in a storied morning of shooting. The first two days had been a bust. This was our last chance.

On the first day, at least, everyone in our party had had his share of opportunities. Many, of course, were missed. The trick had been to set up on one of the small rocky islands scattered throughout the bay that was close enough to where the rafts of eiders, scoters and oldsquaw wanted to fly. Some of these islands were no larger than a suburban yard.

On the second morning, we had set up where the birds had flown the day before, only to stare out at a virtually empty, cloud-covered sky. Our guns remained silent due to the birds’ inexplicable absence.

Bill Brown, a regional director for Ducks Unlimited, took the helm of the boat I had boarded on this final morning, steering it slowly past a fleet of moored lobster trawlers. Hunched in the bow despite the cold sat DU volunteer Shawn Prince. It was his job to keep on the lookout for the numerous rocks that lurk just below the water’s surface. Rocks can appear anywhere in the dark bay and, if struck, they can easily dash a boat, plunging its occupants into the icy depths.

Brown cut the boat into the chop and headed toward a horizon cloaked in darkness as the rest of us twisted our faces away from the bite of the wind and stinging spray of frozen water. We were heading to the outer islands around Isle au Haut, where Brown and his cohorts figured the weather would push most of the birds.

Make Like a Rock
Hunting sea ducks is quite different from hunting dabblers in marshes or swamps. What shocks most first-timers to this type of hunting is that no one uses a call. As Brown explained, calls don’t serve any purpose with these silent, fast-flying birds. All you need is a good spread of decoys placed in a location close enough to where flying birds can see them.

The other marked difference is that hunters don’t sit in blinds. Pulling up that first morning to the small island, which was little more than a large outcropping of rock with a smattering of trees in the middle, we picked our way precariously down a slippery slope that had been under water just hours before. There we took advantage of the low tide and hunkered among the boulders.

[pagebreak] “Don’t worry too much about hiding. It’s more important to just sit still until the ducks get into range,” says Wally Martin, a longtime waterfowler and Maine DU volunteer. Eiders and other sea ducks can easily spot movement and will flare away from your setup quicker than a dove on a Labor Day shoot. Remain still and they may pitch into the water mere feet away, even if the hunter is sitting on an open ledge.

The shadowy hues of most camouflage patterns actually work well against the dark granite. Tides run high and fast throughout the bay, so many rocks are also draped in spongy seaweed that blends well with the patterns.

Setting Decoys
Decoys are everything when you hunt sea ducks. Without them, there’s no need to venture into these dangerous waters. Brown and his friends use a mix of commercial and homemade sled decoys made from plywood and two-by-fours. The dekes are more cost effective for hunters looking to pitch out large setups.

You make a setup by cutting out magnum-sized silhouettes, painting them white with a dash of black near the beak and linking them two wide and two deep using the two-by-fours. Each sled is then tied with a length of rope to another until enough are gathered to let a hunter quickly set and spread them out in a line that mimics a raft of lounging eiders. With a dozen or more silhouettes lashed together in a single raft, the decoys can be quickly retrieved, which is important when bad weather blows in unexpectedly, a common occurrence along the unforgiving Maine coastline.

Commercial decoys can also be connected for quick retrieval, though many hunters simply plop them out among the rafts of homemade dekes to add depth to the spread. Set the decoys close to the shore, just inside the outer edge of a cove that offers birds protection from the elements.

Hold Your Fire
Since shooting time arrives with the rising sun, a sea duck hunter’s morning is much like a cop’s-boredom quickly gives way to heart-pounding action, as birds rocket in seemingly from nowhere. Look for them along the convergence of sea and sky at the horizon, and as soon as you spot an approaching group, have your gun ready to shoulder, but resist the urge to move until they’re well within shooting range.

“You’ve got to watch for them just above the waves. They’ll come in low and fast,” Prince says. “Wait until they’re about thirty yards out or so if they’re swinging by for a pass shot, or let them keep coming if they’re heading straight for the decoys.”

“You definitely want to keep shooting until the ducks quit moving. Just because a duck’s in the water doesn’t mean it’s dead,” Martin says. “They’ll swim off if they can’t fly.” As our experience would reveal, hitting cripples on the water is a challenge in its own right. Waves help deflect shot from the low-sitting ducks, which are also quick to dive from the continuing danger.

[pagebreak] Best Times to Hunt
The sea duck season opens in early October in Maine, and although it was December when we were there, the diehards will tell you to come in January, when winter is at its harshest and the ducks are on the move.

“It’s not uncommon for us to have fifty- and sixty-bird days in January,” says Prince. “But it can get pretty hairy out there on the water, which keeps a lot of other guys in. You definitely have to know what you’re doing or someone could easily get killed.”

Dress warm and in layers, but above all, take a pair of well-insulated waders. You’ll need them to access your boat through shin-deep water either at a ramp or on the island you hunt, and they’ll keep you dry as you wait for incoming ducks atop rocks that are wet from high tidal waters. I was concerned I was overdoing it in December when I wore a pair of Cabela’s 1600 neoprene waders with 1,600 grams of Thinsulate in the boots. But on the final day of hunting, when our group was set up on an open, snow-covered shore, I was the only one in the group not to complain about cold feet.

Gloves are a must. Most of us chose peel-back mittens because they allow you to keep your fingers warm while waiting for the ducks and then expose them when it’s time to shoot.