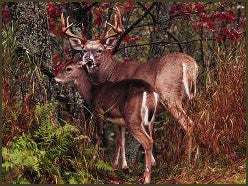 Antlers are the fuel that has driven the whitetail industry to new heights in the last two decades. The mystique associated with big racks has been the impetus behind the popularity of deer hunting seminars and extravaganzas and the quality deer management (QDM) movement. This increased infatuation with antler size has also led to an increased focus on genetics. But for the most part, doe genes aren’t factored into the antler-size equation, even though they are every bit as important as buck genes. Listed here are the latest techniques on how to get bucks bigger by managing does better.

Genetic Recipe
Whitetail breeding is a big business, and breeders are constantly evaluating genetics in an attempt to produce bigger bucks. Dave Griffiths, a successful breeder located in Pennsylvania, believes that within the next five years breeders will be able to match up DNA markers in bucks and does, allowing them to select certain desirable antler traits. Griffiths says, “Often we’ll see the buck’s character passed on through the doe, but the offspring’s antlers will be smaller than his father’s when he matures. Of course, we’ve also seen cases where the offspring had the same drop tine as his father but had more antler mass. By tracking our breeder bucks and does, we’re able to get a feel for specific antler potential; however, this type of management can only be used behind high fences, because there are no visual markers on does that scream, ‘I produce fawns that will grow big racks.'”

But there are things that some wily biologists are doing in the field.

Cases From the Wild
About 10 years ago, Bob Zaiglan, one of the most respected deer biologists in the business, noticed that two areas of a Texas ranch were producing bigger-antlered bucks. Based on this observation, he theorized that some of the does in these two areas had better antler-growing genes. To see if the theory had merit, he eliminated the doe harvest on these two parcels. Now, because both areas have continued to produce larger-antlered bucks than the rest of the ranch, he believes that by protecting the does he’s been able to maximize the superior antler-growing genes.

When Dr. Grant Woods, another leading whitetail biologist/consultant, begins implementing a QDM plan in an area, he quickly works to get the ratio of adult does to antlered bucks under 3 to 1. Woods harvests the oldest does first because they were born before the QDM program was started. Later in the program, Woods preserves the older does because research has shown that big, healthy, dominant does have larger and stronger fawns than sub-adult does do. Though these tactics are far from conclusive, they should help you to up the odds of growing trophy deer on your spread.