Poachers provide a new meaning for the phrase "no-brainer." 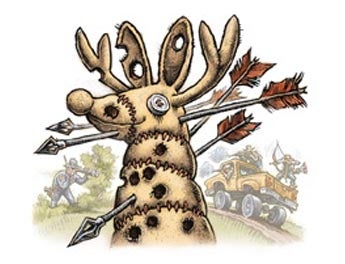 Some of the most outrageous stories you’ll ever hear center on poachers. Here are three.

Tag Team: A few years ago, I accompanied two Oregon State Troopers on an elk decoy operation. We were looking for a site to place the decoys when a pickup drove by with two whole bull elk in the back. After a chase down a Forest Service road, the truck finally pulled over. One bull had a salmon/steelhead tag attached to it. It turned out the hunter had drawn a tag for the unit but forgot to buy it before the season started. Since the salmon/steelhead tag looked similar to the elk tag, he thought he could get away with it.

Road Rage: Sometimes adrenaline takes over and a poacher just doesn’t know when to give up. On one occasion, a poacher spotted a deer decoy as he was cruising down a gravel road and slammed on the brakes, causing the truck to slide into a ditch and end up on its side. After a few seconds, the man popped out of the passenger side door, opening it like a hatch, and began shooting at the decoy, oblivious of the damage to his truck.

Nuptial Numbskulls: During archery season a few years back, troopers saw a pickup with a woman driving and her husband in the back approach a decoy. After he loosed a few arrows from the bed the couple was written citations. Angered, they went to leave, but realized they had locked the keys in the truck. Out of frustration, the man attempted to throw a rock through the window…but missed and put a huge dent in the door. Finally he smashed the window with the rock. Turns out the pickup was rented and the couple was on their honeymoon. What a way to start a marriage.