Outdoor Life Articles Editor Doug Howlett traveled to southern New Mexico to hunt antelope where the animals are only hunted two days out of the year and can only be taken with a muzzleloading rifle. Read DAY TWO here. 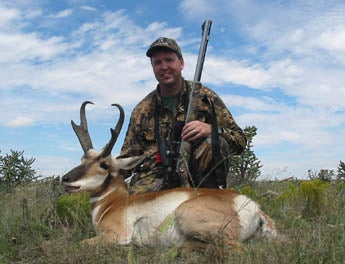 DAY TWO – Saturday
The next morning I set off in an old Dodge flatbed with Chester Berry, my guide, and Mark Chesnut, editor of the NRA’s America’s First Freedom magazine. Our hunt area, which we have virtually to ourselves, stretches over 54 square miles. We will cruise the ranch roads and glass for bucks. Once a good one is located, either Mark or myself, will get out with Chester and make a stalk. The first hours reveal a lot of nice bucks through our binoculars, but nothing that we are ready to pull the trigger on. Mark and I keep a tally of the would-be shooters.

Later in the morning, we run into the game warden, who put us on to a huge buck he spotted earlier. On the way, we stop to attempt a stalk on another tall-horned buck lounging with a few does near a waterhole. Unfortunately, we have to make our way cautiously around an agitated 1,000-plus pound bull. By the time we get into position for a shot, the antelope have moved into the open where a stalk would be impossible.

We decide to try the buck the wildlife officer told us about. Just past a car that had been abandoned during an apparent drug deal, we spot the trophy. He is among a herd of a dozen animals. Chester grabs the burlap and I sling the .52-caliber Disc rifle over my shoulder as we set off at a fast pace. Three hundred yards later, a doe locks her gaze on the strange brown image of Chester and I wrapped in the material. We freeze behind a large cactus until the group moves over a ridge.

“Come on, come on,” Chester huffs as we march double-time to reach the hilltop before they move out of range. Suddenly, the group pops back into sight.

“Get ready. That buck’s going to follow them back across,” Chester says. I drop to the ground and set the muzzleloader on a pair of shooting sticks.

“You see him?” Chester asks, squinting through his rangefinder. “He’s 164 yards out.”

I spot him through the scope, but the crosshairs dance up and down with each gasping breath. It’s no good. I hold my shot. We attempt another stalk on the same group after they move out of sight, but before I can get a clear shot, the big one in the group disappears behind the hill.

Several miles and another dozen bucks later we roll up on a location where we earlier debated on whether to make a stalk on a nice buck we spotted. On the flat below, three males feed. One of them looks like the one we considered earlier. This time, I decide, there will be no debate.

I ease out of the truck and crouching, slip along a fence line. The band of bucks grows nervous and begins to walk away. I continue on until I come to a fencepost that makes an ideal rest. I lay the gun across the top and take aim.

The buck turns to look back, twisting his body toward me. The Multi-Zero scope is still set for 200 yards from the earlier stalk, but the gun, I know is shooting pretty flat. I place the crosshairs just below the center of the buck’s shoulder and gently squeeze the trigger. The shot erupts in a plume of smoke followed by the immediate sound of the bullet smacking hide. I have just taken my first antelope.

To Read More of Doug Howlett’s Hunt Click Below