Outdoor Life Articles Editor Doug Howlett traveled to southern New Mexico to hunt antelope where the animals are only hunted two days out of the year and can only be taken with a muzzleloading rifle. Read DAY ONE here. 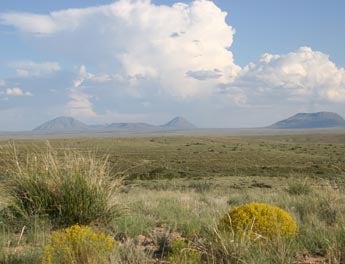 Friday
The hot Texas air greets me as I step from the jet into a stagnant bridgeway. It is still only morning in El Paso, but already the sun is beating down with its usual late-summer ferocity. The gamble to pack light looks like it has been the right one.

Besides traveling with virtually one change of hunting clothes for the two-day hunt, I didn’t have to worry about toting a firearm, an added hassle on any flight. Tony Knight of Knight Rifles is supplying the firepower on this trip. He’s going to let those of us on this New Mexico antelope hunt try out his Knight Vision .50-caliber and the Disc .52-caliber Extreme in-line rifles.

The terrain where we are headed is supposed to be wide open, making for challenging stalks and, quite likely, stretched shots for a smokepole, which is exactly Tony’s plan. His in-lines are delivering modern rifle-like accuracy out to 200 and even 300 yards. He wants to make sure we have a chance to experience that.

Our group assembles at the baggage claim as our flights arrive and it isn’t long before we are rolling toward New Mexico in a caravan of SUVs. I stare out the window of Mike Schweibel’s tricked out Safari Club International Chevy Suburban at the depressingly brown rows of industrial shops, junkyards and strip clubs. We roll past a taxi garage and liquor store that shares the same decrepit building.

“Bad combination,” I think to myself as I close my travel weary eyes between conversations. The sudden crunch of rock beneath Mike’s tires jolts me awake. Another 30 miles down the dusty road and we turn into camp, made unique by the three large bone-colored teepees jutting above the horizon. Two of the teepees are lined with a 1970s looking green shag carpet and animal hides. Cots with mattresses line the circular walls. The other teepee has a sink and shower that actually offer hot water. The outfitter, Steve Jones, who runs Backcountry Hunts (backcountryhunts.com), wants to make sure that roughing it is a relative term for his guests.

We have only a couple hours of light to get the guns sighted in. Near the camp, a shooting bench has been set before hanging metal targets posted at 100, 150, 175 and 200 yards. Each in-line is topped with a Kahles Multi-Zero scope, which allows the user to zero the scope at a base setting of say, 100 yards, then with the turn of a knob, sight the rifle in at several different distances for quick adjustment in the field.

The muzzleloaders are soon barking and metal targets clanging as we take turns at the bench. With the 200-yard target producing a consistent ringing, our excitement grows at what tomorrow has in store.

To Read More of Doug Howlett’s Hunt Click Below