Finding these hideaways is the key to taking monster bulls 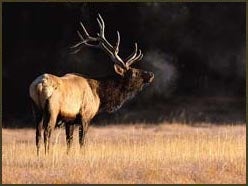 It happens every year. A hunter ties an elk tag to a huge bull in an area that typically supports much smaller and younger bulls. So why does this occur? Does the big boy show up after making a marathon trek from a distant mountain range, a trek that goes against usual movements and travel patterns?

My best guess is that occasionally big bulls are routed out of their secret, long-term hiding places, usually by accident, but sometimes by savvy hunters who understand this aspect of elk behavior. More than once I’ve flushed a buster bull from a miserable patch of timber and been surprised at the size of the animal, particularly when I’ve hunted public land where hunter pressure is heavy and small bulls are the norm.

I never really appreciated how these loner bulls operated until I had a conversation with Billy Stockton, an old Montana outfitter pal who is the best elk hunter I know. Billy and I were bear hunting about 20 years ago when the subject of elk habits came up. Billy explained that an occasional big bull will find a safe haven in what he calls a “nest.” The bull may remain there for weeks and never leave that spot.

After listening to Billy describe this unique hiding aspect, I realized that I’d stumbled on many “nests,” or lairs, over the years but never really knew what they were. Ever since that conversation, I’ve discovered many more such nests, and I’m convinced that this behavior is far more widespread than I’d initially realized as I’ve encountered these lairs in a half-dozen states.

It’s important to understand that these nests are not temporary daytime bedding areas or hiding spots that a bull uses when he returns from a feeding area some distance away. A true nest is one that a bull never leaves unless weather, predators or hunter disturbance force him to.

** What Makes a Nest?**
I’ve come up with a common denominator for these nests. Since elk don’t leave their lairs, food and water are two obvious ingredients. If either is missing, a potential hideaway simply isn’t used on a long-term basis, though it may serve as a bedding area, which the elk leaves daily. He may not return to it each morning, however, and may use other areas as well.

Because the bull by nature seeks the most secure hiding spot in his timbered domain for his nest, he’ll feel safest in the thickest cover he can find. This may be a wicked blowdown, where trees have been toppled on each other by gale-force winds, creating a practically impenetrable jungle (at least to humans). I’ve seen animals in places where you’d think a rabbit would have trouble getting through.

Since plenty of food must be close at hand, a lair will be in a place where enough sun strikes the forest floor to encourage the growth of grass and underbrush preferred by elk. This rules out old-growth forests with canopies so tight that no browse can grow.

Water is also essential, requiring a location next to a creek, spring or seep. With both food and water available, the bull needs only security cover to maintain a comfortable existence.

The bull that lives in a nest is usually not a youngster sporting a four- or five-point rack, but a mature elk that has earned a college degree in evasive tactics. He’s probably been fired upon at least once and is thoroughly respectful of hunter presence in the woods. He’s learned that people are far less abundant in certain parts of his forested domain, which is precisely why he’s learned to stay put in such places.

** Watch The Back Door
** Practically every nest I’ve found has an escape route that a smart bull can use to quickly exit his sanctuary if he’s discovered. This route typically leads to busted country with plenty of deadfalls, heavy timber and few trails used by humans. A deep, inaccessible canyon may be his safety niche, or a high promontory near timberline where stunted trees provide tightt cover.

When searching for a nest, I’ll immediately discard areas close to good roads on public lands or adjacent to trails that are used by ATV riders or have heavy horse traffic. Elk will shun those places and will look for spots as far off the beaten track as possible.

Locating a nest requires hiking many miles to penetrate the backcountry. Unfortunately, half of those miles will be uphill, often in very steep, timbered country. A hunter who doesn’t venture very far from his vehicle has almost no chance of ever finding a hidden bull. Make no mistake, this adventure is not for the casual hunter who isn’t interested in working hard, but for the enthusiastic soul who wants the ultimate challenge in the elk woods.

** When Nobody’s Home**
Should you find a nest, it’s possible the bull may have heard you walking in the dense woods, or perhaps smelled you long before your arrival and taken off. You must work with the wind in your favor, and you should move as quietly as possible, wearing quiet clothing like wool that doesn’t betray your presence as you move through the brush.

Identifying an area as a nest is simple. You’ll see plenty of fresh droppings and signs of intense feeding. I’ve seen nests so heavily used they smelled like barnyards, and you could hardly walk without stepping on pellets.

If you spook a bull out of his nest, you aren’t likely to see him again that day. He’ll evaporate like smoke and head for the nastiest country around. Chances are good, however, that he’ll return to his lair later, when he feels safe, which is a good reason for you to come back to try him again. You’ll have the advantage of knowing precisely where his hideout is and you can work with the wind.

Relocating a lair in the big Western mountains may be tough, but you can mark a route in with flagging tape, which should be removed when you leave, or use a GPS unit. You might also note landmarks or use a map and compass to find your way back to the nest.

Loner bulls that hide in nests do so after the breeding season. Otherwise, they’d be with cows. This means you’ll be afield after the rut, when vocalization among elk is essentially over. You’ll be in the quiet woods seeking a silent quarry. In the enormous mountain country of the Rockies, you can count on a serious physical challenge.

Finding a bull’s nest is not an everyday occurrence, but if you locate one, and everything works in your favor, you’ll likely tie your tag to the Bull of the Woods. And believe me, you’ll have earned him.