Faces in the Field: Steve and Debbie Stratton

Jerky Worth Fightin' For 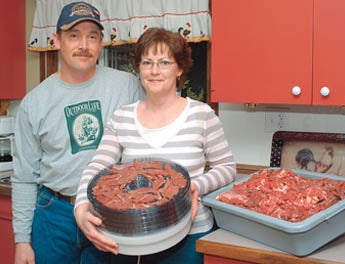 Last deer season, Debbie Stratton of Flushing, Ohio, was making venison jerky for her nephew in the U.S. Army in South Korea when a friend asked if she could also send some to her son, an Army staff sergeant in Baghdad. Stratton happily agreed and prepared some for the sergeant, who shared it with his fellow troops.

“We heard they were really excited to get it,” says Stratton. “The jerky’s high in protein and it’s easy for them to carry.” With the troops eager for more, she asked around for venison. But the deer season was winding down, and she received only 50 pounds. Undaunted, she’s gearing up for this year. A local deer club is now urging members to donate venison to Stratton. A nearby American Legion post has provided a vacuum sealer, and Debbie and husband Steve, a hunter himself, have purchased a used meat slicer in anticipation of all the meat.

“I look forward to making more. All of the soldiers who hunt are so happy to get a taste of home,” she says.