Faces in the Field

Mike Davis: Man of Many, Many Turkey Feathers 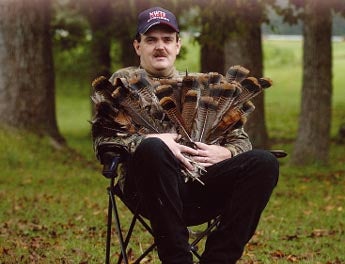 When he started collecting turkey feathers a few years ago, Mike Davis never imagined he’d drive a pickup truck loaded with them to National Wild Turkey Federation (NWTF) headquarters. But that’s exactly what he did last summer, making the four-hour one-way trip on the interstate to Edgefield, S.C., hauling feathers he’d saved, scavenged, pulled and plucked.

“Last year, I did fifteen whole birds and a hundred twenty-five wings,” says Davis, 36, a mill worker from Elizabethtown, N.C. “Wing feathers pull out pretty easy, but it takes about two to three hours to do a whole bird.”

The feathers are given to the Zuni Nation of New Mexico, explains NWTF biologist Jennifer Tapley, to adorn traditional religious and dance costumes. Since the fall of 2000, NWTF has collected 1.2 million feathers, and Tapley estimated Davis’s August 2004 donation at 55,000.

“It’s an ongoing project for me, and I know it’s going for a good cause.”