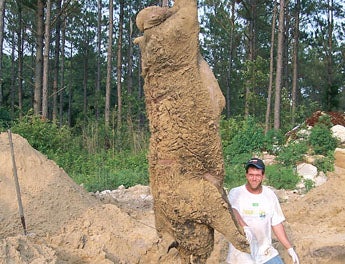 When stories of two giant wild hogs recently circulated on the Web, they were met with both amazement and skepticism. The first hog was reportedly killed last June on River Oaks Plantation in Georgia by guide Chris Griffin. Plantation owner Ken Holyoak estimated that the hog, dubbed Hogzilla, weighed at least 1,000 pounds and was 12 feet long. He and Griffin lopped off the head and buried the body in a trench.

The online tale of the other huge hog varies in its location-one places it in Florida, another in Texas-but the pig was indeed shot in Florida by Larry Earley, an Orlando firefighter. Earley’s pig was never weighed, but Rob Bradow butchered it and estimates it at more than 1,000 pounds.

National Geographic dug up Hogzilla’s remains and reported its findings on the show Explorer. Scientists estimated the animal weighed around 800 pounds and measured about 8 feet, smaller than originally claimed. A geneticist determined that it was a hybrid of a wild hog and a Berkshire pig, a common domestic breed able to reach more than 1,000 pounds. Earley did a little snooping and determined his was also a crossbreed that grew large by raiding local cattle feeders.