How to turn your beagle into a rabbit retriever. 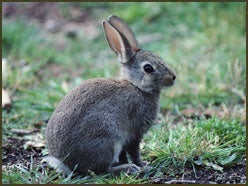 I don’t believe it,” Steve Zahurak blurted, wide-eyed in amazement. He had been warned in advance of what he might witness, yet he was still stunned when King, John Fazio’s six-year-old beagle, picked up a rabbit Fazio had just shot and brought it back to him. A Lab couldn’t have done the job better, or as nonchalantly. I could tell this wasn’t the first cottontail King had retrieved for his master.

Zahurak and I were hunting prime New York rabbit country in Ulster County with Fazio, whose beagle-training sessions aren’t limited to trailing and running rabbits. For several years, Fazio has coached his beagles to retrieve rabbits and he is convinced other hunters can do the same with their hounds. “Obedience is the key,” he says.

Happenstance set the table for the trainer’s innovative techniques. Fazio, a 39-year-old former long-haul trucker, had to abandon that career after an accident. During his recovery, he was practically reduced to hobbling. He could still pursue his favorite outdoor pastime-rabbit hunting-but quickly discovered that retrieving downed game was a monumental task. On one occasion, as Fazio was slow to go after a cottontail he had shot, his impatient beagle Chaser ran to the rabbit and picked it up. Then he looked sheepishly at his master, standing several yards away. Fazio called the dog and Chaser dutifully came trotting up with the rabbit in his maw. Fazio had an idea. “Chaser didn’t want to put the rabbit down. I petted him, praised him and got him to let go of the rabbit in my hand without having to play tug-of-war,” Fazio recalls.

Once the rest of the pack saw what Chaser had done-and their master’s reaction-training them became a surprisingly easy task. Of course, Fazio has plenty of opportunity to work beagles and run rabbits. He concentrates his efforts primarily in and around the multitude of apple orchards in New York’s mid-Hudson Valley. Fazio guides rabbit hunters and operates a pheasant preserve near his home. He also trains the beagles of other hunters to retrieve game.

A Plan Unfolds
The obedience training critical to developing a rabbit retriever begins at an early age. When his pups are six to eight weeks old, Fazio starts working with them for a few minutes each day to encourage them to come to him. When the pups reach eight weeks old, training becomes more intense.

“By the time the beagles are two months old, I have to get them to listen to me,” Fazio emphasizes. “I put a rope on them and tell them to come. If they won’t, I’ll tug the rope. I don’t work them too hard-just ten to fifteen minutes a day-but by the end of the session, I make sure they come to me. I can’t let them defy me.”

When the pups are four months, Fazio starts throwing training dummies and trains the young beagles to retrieve and drop them at his feet. The intention is to make Fazio the focus of their world. Gradually, as Fazio feels they are ready, he takes the pups afield with the older dogs. They’re exposed to hunting and shooting and might be given the chance to participate in a chase. When an older dog brings in a cottontail Fazio has shot, the hunter will wait until the pack returns to hunting and use the dead rabbit to train the rookies to retrieve.

Then obedience training comes into play again. After he tosses the rabbit away, Fazio watches to see which dog gets to it first and immediately calls off all the others by name.

“You have to know your dog,” Fazio says. “He might bring the rabbit to you but not drop it in front of you. If you’re hunting with a pack, he might not want to drop it because he thinks another dog will pick it up.” If one of Fazio’s dogs won’t let go of the rabbit, the hunter might pinch the beagle’s nose to hamper its breathing until it does drop the cottontail. “You tell him ‘drop it’ and he’ll get the message.”

Attitude Adjustment
Sometimes if aa dog is unwilling to hand over the rabbit, Fazio will simply walk on, knowing the beagle will follow him while the other dogs resume hunting. After a while, the dog will nudge Fazio’s leg, effectively hinting, “Come on, take this from me, because I’m missing the action.” Or, when the pack opens in full cry after another rabbit is jumped, the retriever will drop the bunny and head for the chase.

“It boils down to patience. Beagles sometimes forget their manners and have to be given time to remember what to do,” Fazio says.

On the day Zahurak and I hunted with Fazio’s string, Zahurak’s nine-year-old bitch Sophie demonstrated a lot of “search,” which Fazio defines as a beagle’s willingness to get into the thickest coverts. She hunted hard and diligently in a way that let us know she had decided she wasn’t going to be upstaged by King. When Fazio shot a cottontail several yards in front of Sophie, we were downright amazed by what she did next.

Sophie and King ran toward the downed rabbit. King got there first, but Fazio, noting Sophie’s enthusiasm, called him off. Without pausing to consider what to do, Sophie picked up the cottontail gently in her mouth and took it to Zahurak. Sophie was full of surprises, or so it seemed to us.

“If you run and get the rabbit and don’t give a dog the chance to pick it up, you’ll never know whether he’ll retrieve,” Fazio says. “Some beagles retrieve on their own, some need training. Either way, you can have a rabbit retriever if you want one.”

It’s something to think about the next time you’re waist-high in the mother of all blackberry thickets trying to find and retrieve the cottontail you just shot. Contact: John Fazio (845-590-2474; jfdoghandler@aol.com).