Carve a deer yourself and save money this season. 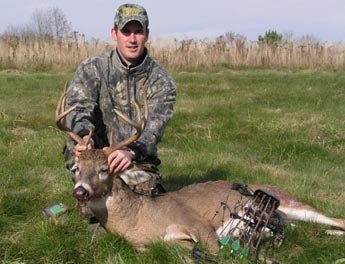 The process of cutting up a deer can be intimidating to hunters. It seems like you need the skills of a butcher to do it, but really you don’t. I’ve been doing it for 40 years, and I learned on my own. My cuts aren’t as precise as those of a professional, but I save quite a bit of cash by doing it myself.

Start by skinning the carcass, removing all visible fat and hair. The fat in venison is not the same as that found in domestic livestock; it imparts a gamy taste. Whether or not to age the carcass depends on whether you have a cool place to hang it that’s free of flies and pets. Whenever possible, I’ll hang a carcass in my garage for three to five days. A temperature of 40 to 45 degrees is ideal, if you’re able to control it.

Knives must be sharp, so keep a sharpening stone handy. Also have containers ready to put meat in.

Field-Dress First
1. Turn the animal so its head is downhill and bleed it by slitting the throat below the jawbone. Next, sever the windpipe, which is the firm, white tube. While the deer is being bled, remove its testicles and scent glands on its hind legs. (The glands are identified by the long hairs protruding from them.)

**2. **Open the stomach cavity after cutting a circle around the anus and removing the genitals. Hold the back of your knife blade against your index finger, and slide your finger and blade just under the skin. Be sure to leave the organs intact. Cut through the ribs at the breastbone and continue up to the neck.

3. With a knife, remove the diaphragm (the thick skin that separates the organs from the chest cavity) from the spine to the rib cage. Then grasp the windpipe and pull downward. All the innards should exit through the stomach opening. Prop the carcass up and wipe the cavity clean.

**1. Hams **Cut off the hams by locating the joint, or leave them intact and simply work the meat off. I slice off large chunks for roasts and steaks. You can determine where to cut by following the muscles that separate the ham. Leave these large chunks as they are-they make delicious rump and other roasts-or cut them into steaks. I prefer my steaks to be less than 1 inch thick. As with the front shoulders, I use the meat on the shanks.

2. Backstraps Remove the backstraps, which lie along the backbone from the rump to the chest. Cut closely along the backbone. Remove the knife and make a parallel cut a few inches below the first. You’ll feel the ribs with your point, which tells you where to begin. Carefully lift the meat as you cut to get a long strip.

**3. Neck Meat **One of the first cuts to make is on the neck. You’ll notice that the meat on the neck has some fat and gristle. Get rid of it. Cut the meat into chunks and use it for stews and burgers.

4. Tenderloins The tenderloins are small strips that lie inside the carcass flanking the spine. Cut these out carefully by following the spine and the back shoulder closely with a sharp knife. Each loin will be a long, boneless strip of meat. These are the best cuts of all.

5. Ribs and Breast Separate the rack from the breast. Do this by cutting roughly 3 inches below the inner edge of the backbone. Remove all the meat off the ribs. It can be used for chops, roasts, stews or burgers.

**6. Front Shoulders **Take off each shoulder by cutting completely around the bone. To find the joint, lift up the leg and you’ll see where it attaches. Once the shoulder is separated, cut off the large piece of meat; this is the shoulder roast. Trim the rest for stews and burgers.