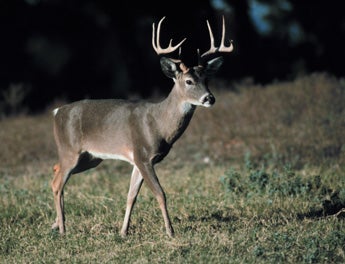 Ten public hunting areas will require bucks to have at least three points per side to be legal, including the new Box R Ranch WMA in Franklin County.

Eight areas will switch to the three-point rule, including the following WMAs: Bluewater Creek, the Hutton Unit of the Blackwater, Flint Rock, Camp Blanding, Halfmoon, Hilochee, Hickory Hammock and DuPuis WEA. The Dexter Mary Farm Unit of the Lake George WMA was opened last season and began with the three-point restriction. Statewide surveys have been in favor of the changes.

“Half the hunters wanted some sort of QDM rule and half didn’t,” says state deer management leader John Morgan. “So the commissioners decided not to change the statewide rule.”

Morgan says commissioners felt it was worth changing only some WMAs after evidence showed the forked-antler restriction produced an increase in survival rates of young bucks.

Antlerless deer harvest increased by about 10 percent in the 2002-03 season, the last for which figures are available.