Getting In & Out of Your Stand

Most of us tend to take the shortest and straightest line from Point A (the truck) to Point B (the stand). But often you can't do that without spooking whitetails within a few hundred yards of your post. 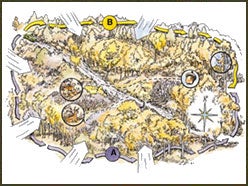 Most of us tend to take the shortest and straightest line from Point A (the truck) to Point B (the stand). But often you can’t do that without spooking whitetails within a few hundred yards of your post. In the illustrated example shown here, an old logging road wends from where you would park to the stand, which is in a grove of white oaks a half-mile out on a ridge. It’s easy walking, but if some does bed in a thicket near the road or a good buck lies up on a bench 100 yards downwind, they might see or smell you. Even if you sneak by unnoticed, the deer might move toward the acorns at dusk, cut your trail, whiff your scent and get leery. After a couple of intrusions like that, the does, and especially the buck, are apt to alter their bed-to-feed pattern, and your stand on the ridge might go cold.

Aerial photos and topo maps are great tools for scouting stand sites. Once you’ve chosen a spot and set your stand, go back and study the terrain features and covers between your truck and your perch. Then plan a wide, circular route into your stand. Avoid “high-activity” spots by walking through dead zones where you shouldn’t bump deer. You might have to hike a half-mile farther than normal, but it will be worth it.

Play the Wind
Plan a couple of routes into a stand for use on different winds. Let’s go back to our ridge post. It sits on the east end of the ridge and deer are bedding to the west. Many days a west or northwest wind will predominate, so use main Route A to stay out of sniffing range of the does and the buck.

If a chilly wind blows out of the north, stick to Route A. But if it warms up and the wind turns out of the south or southwest, switch to Route B. By the way, if the wind were to do a 180 and blow out of the east, you’d be crazy to try to hunt that stand, since deer would surely smell you.

**Entry and Exit Tips **
Try to approach an evening stand from the food side. Let’s say deer are feeding in an alfalfa field and bedding 300 yards back in the timber along a river. Well, early one afternoon when the wind blows out from the river, sneak silently down the edge of the field toward your post. Look for trails that empty into the green grain and cross as few of them as possible. There’s no way that deer should see or smell you.

In the same vein, skirt a feeding area and sneak toward a morning stand from the bedding side. It’s a little trickier because you never know exactly where a buck will be. He might already be bedded in a thicket, he might be lingering in a field or around acorns, or he might be somewhere in between, moving from feed back toward cover. Still, if you’ve planned your entry downwind and through dead zones, you should be able to slip in and set up without spooking deer.

One last thing. Many hunters take great pains to approach a stand carefully, but once a hunt is over at midmorning or after dark, they lose their edge and bumble back toward their trucks. Big mistake! Busting deer on the hike out is almost as bad as spooking them on the way in. So play the wind and hike out through dead woods where a buck won’t see or smell you.