Ghost Bear: The Story of M23

This 22-year-old griz was trapped and fitted with a GPS collar in order to track his every move. 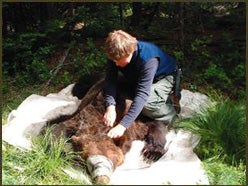 The residents of tiny Seeley Lake, Mont., never knew a 300-pound grizzly shared their neighborhood for much of last summer. The bear never raided cabins or killed calves, but for several weeks it loitered around the outskirts of town, moving mostly at night and without attracting attention to itself.

Thanks to a rugged necklace containing gee-whiz technology, residents now know the old bear visited backyard bird feeders and dined on deer carcasses dumped by poachers. They know the 22-year-old boar traveled a couple hundred miles over 20 days last September. And they now know they can live with bears, as long as they’re as well-behaved as this old gent.

They know all this because of a $3,000 collar that was cinched around the bear’s neck when it was accidentally trapped in June by state biologists working on a black bear study in Montana’s Swan Valley. When the collar automatically released four months later, the onboard memory chip contained 2,369 waypoints triangulated from satellites-a virtual map of the bear’s location every hour of every day. The GPS collar provided an unprecedented level of detail of the bear’s movements, food and lodging preferences, even its reaction to Highway 83, a lonely blacktop road that bisects the wooded valley.

To understand the importance of this data, you have to consider the alternatives. “Normally, when we radio-collar a bear, we can get a signal once or twice in a week, and that’s only in the daytime when the weather’s clear enough to fly,” says Chris Servheen, lead grizzly bear recovery manager for the U.S. Fish & Wildlife Service in Missoula, Mont. “We have no idea what that bear does between flights. And if it’s not collared, we hear about it only when it’s in trouble or dead.”

The assumption has been that civilization is anathema to grizzlies, and vice versa. If bear managers didn’t hear about marauding silvertips, it was because they were way back in the wilderness, they figured. Nobody guessed bears could live so close, and so comfortably, to the margins of a municipality.

But Seeley Lake is outside the grizzly recovery area (the area designated by the federal government as prime, protected habitat), so its bears’ fate is in their own paws, so to speak. If they remain ghosts, like last summer’s griz, and don’t draw attention to themselves, they might roam as far east as Montana’s Missouri River Breaks. But if they kill lambs, or raid aviaries, or otherwise run afoul of humanity, then they’re almost certain to be confined to a relatively small ecosystem, the same 2 percent of their former range in the Lower 48 that they’ve been limited to for most of the last century.