Up your odds by putting your whitetails under surveillance. 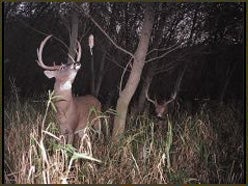 A buck with a 160-inch rack, a barrel chest and a belly that sagged like an old man’s came charging out of a drainage after a doe. Mark Drury slid his truck to a stop and grabbed his binocular. It was midday in the early post-rut, a period when bucks can be moving at any time. Focusing his glasses on the buck’s head, Drury realized that he had never seen this old buck before. He watched it for a few seconds before it bounded out of sight.

Years ago Drury would’ve been left guessing whether the buck called this place home or was just cruising through. Now he had other options. To find out if the buck was living somewhere inside this 600- to 800-acre section of Iowa farmland, he hung 10 small surveillance cameras on trees near muddy trails and tight funnels that led into 10 crop fields and food plots in the area. It was getting on toward the end of November and the beginning of the post-rut, so Drury figured the old deer was feeding like a pig somewhere in the area to prepare for winter.

If so, the buck probably wasn’t bedding too far back in the nearby timber.

On November 21 and 24 and December 1, the buck passed three cameras that were set close together in a strip of woods connecting two soybean fields. Drury nearly lost it when he got those pictures back. “It was one of the oldest, most awesome bucks I’d ever seen!” he roared. “And I knew right where he ate and slept.”

Drury quickly drew up a plan. The photos enabled him to eliminate the hundreds of acres and eight fields where seven of the cameras had gone cold. He hung stands in and around the two bean fields where he’d snapped the buck’s photos and hunted right there for the rest of the season.

During the gloom of a misty, bone-chilling, mid-December evening, the old warrior swaggered out into one of those fields. Thanks to his trail cameras, Drury was right there waiting with his muzzleloader.

Set up a Surveillance Net
As the previous account shows, scattering a few trail cameras armed with motion and heat sensors across a property not only gives you a good idea of the number of bucks on your land, but also gives you tangible evidence of the maturity and antler quality of those bucks.

Set out your cameras in late August, when bucks are locked into bed-to-feed patterns and before the first wave of archers puts pressure on them. You might snap one or more photos of a dominant whitetail striding down a trail that leads into a crop field. If you’re really lucky, you might photograph a bachelor group of four or five good bucks. Ron Bice, a specialist with the Wildlife Research Center who figures his trail cameras took between 1,500 and 2,000 photos last fall, says, “In a few weeks, some of those bucks will disperse a few miles as bachelor groups break up, but one or two should stay in the area. To be sure, keep your cameras running. If you photograph a huge buck in the pre-rut, you can figure he’s a resident of your land.”

Drury believes that the rut is the best time to take pictures of big deer during daylight hours, especially around major scrapes. If you get photos of big deer at scrapes before or just after sunset, you know to put your stand along the trail, closer to the bedding cover.

As late season approaches, shift the cameras to monitor major trails that lead to or from late food sources, such as corn and soybeans. If you’re lucky, you might snap a photo of a famished, rut-stressed monster that gave you the slip last month. A photo will let you know that the buck survived the gauntlet of bow- and gun hunters, as well as where it’s feeding.

Get the Right Angle
A cam’s heat and motion sensors can trip a photo when a deer walks by at 50 or 60 feet, but all you are likely to get is a tiny image or, if at night, a pair of glowing eyes. To get close-ups, hang your cameras where terrain or structure funnels deer.

Most cameras take an overall light reading; as a result, if a trail camera is set facing due east or west, the rising or setting sun can overexpose the images. (If the camera is pointed toward the sun, the unit’s heat sensor might even set it off.)

When you go for tight shots, you’ve got to be incognito. Trail cameras allow you to scout in a very low-impact way, so maximize that advantage. Sneak into an area and hang a camera or change film at midday, when most deer are inactive. Approach a photo site from downwind, and don’t walk along deer trails. Wear rubber boots and gloves, and douse your camo with a scent killer. Once you’ve set and activated a camera or swapped film, slip quickly out of the area.

Cameras in the Bedroom
Most people set their cams along trails or over scrapes, but Ron Bice often gets aggressive and hides one in a buck’s bedroom. In thick cover deep in the timber, deer often get up and move around during daylight hours, making it likely that they’ll trip the camera.

It’s risky because you have to sneak in there at least twice: once to set a camera and again to retrieve the film. Anytime you set a camera, change film or hunt near a bedding area, make doubly sure the wind is blowing out of the cover and sneak in from a direction where you won’t jump deer.

It can be worth the risk, because if you snap a picture of a big deer in its bedroom you’ll know where that deer is moving out of at dusk. You also know where it’s heading at first light the next morning. Now you can simply hang a tree stand along a trail or funnel that connects that cover with surrounding food sources for a high-odds ambush.

If Bice finds a large, fresh scrape on the fringe of a bedding area in late October or November, he hangs one of his company’s Ultimate Scrape Drippers over it, then sets a trail camera about 9 feet away. “Sometimes scent will pull a buck over to a scrape and position him in front of the camera,” he says. “That’s how we get some of our best shots.”

Connecting the Dots
Tack-sharp photos of a mega-buck are fun to gawk over with your hunting companions, but they mean little until you connect the dots. Cross-reference your trail photos with sightings and any recently discovered rut sign. Pull out an aerial photo and use all the data to define a buck’s core area-it will likely be smaller than you think, maybe only several hundred acres. Draw lines from two or more spots where you took a buck’s picture to bedding cover and food sources. With enough recon you should be able to determine what ridges, draws and trails the buck is using.

Now you’re ready. One day when the wind is right, sneak into a buck’s core area, hang a tree stand and hunt it hard before the deer changes its pattern. Your next photo just might be of you, grinning with your hands wrapped around the buck’s antlers.