How to hide yourself in plain sight. 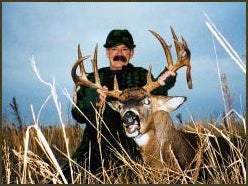 One October afternoon, a big Saskatchewan buck stepped out of the bush, threw up his head and looked 200 yards across a clearing at my pop-up blind. I froze, but that didn’t stop the bruiser from flagging away like he’d seen the bogeyman.

Three weeks later I returned to Canada. This time I moved my pop-up blind 60 yards in from my previous setup spot, tucked it deeper into the spruce and brushed it with boughs. Another huge deer stepped out of the bush and looked my way. “Uh-oh,” I thought to myself. But the buck dropped his head and kept coming, his 150-inch rack shining in the sun. My .270 cracked and he fell 70 yards from the blind’s door.

Those hunts last fall pretty much sum it up. You can either spook a big deer or kill it from a ground blind. It depends on where you put the blind and how you set it up.

**Natural Hides **
A round hay bale, a slash pile, a fallen treetop, a tangle of switch grass-if you can find such a structure near a food source or a funnel blazed with rubs and scrapes, it should be your first choice for a ground attack. Try to hide in a nook or cranny that deer see and walk past every day.

Sometimes you’ve got to take your game to the deer. Last December, I found there was a load of deer staging in a CRP field to feed on forbs. The pasture was dotted with cedars two to four feet high. I cut a few bushes, dragged them to a spot where the visibility and wind were good, arranged a hide and climbed in. That afternoon 20 deer strolled within muzzleloader range and never blinked an eye. I bagged an eight-pointer.

It worked because I was able to blend my blind into the surroundings. If you can’t do that, forget about it. If you build a new blind out in an open field (or in open woods) and try to hunt it the same day, every mature deer will spot it, slam on the brakes and wonder, “What’s that thing?”

Whether building a blind or sprucing up a natural structure, cover your back. Background cover is what breaks your outline and hides your movement. And don’t get carried away. The smaller the blind the better.

Portable Blinds
Pop-ups can work well if they’re hidden. No matter how good the blind’s camo pattern looks, it’s still not the real thing. Tuck a portable blind in a brushy fencerow, against a deadfall, several feet back in the timber that rims a field…you get the idea.

Choose a camouflage pattern that matches your terrain. Then cover the blind with oak limbs, pine boughs, prairie grass or whatever’s prevalent.

Sunlight shining onto a nylon blind can light it up like neon. Whitetails can spot that sheen hundreds of yards away. Face a morning blind west and an evening blind east so you’ll be hidden in shadows.

Spray a pop-up with an odor killer. Climb inside and sit on a cloth-and-aluminum chair that you’ve also packed in. You need a good seat to hunt still and to have enough elevation to see and shoot out of the portals.