How to Train a Ryman Setter

How to get the most out of these instinctive dogs. 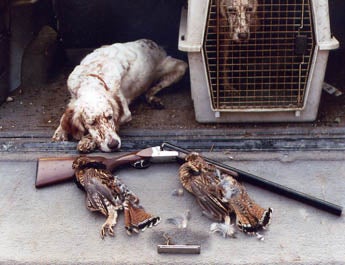 If an old-style Pennsylvania setter is in your plans, forget everything you ever knew about command training. English setters with George Ryman ancestry are born with the genes to search, set birds, back points, relocate on birds that move, do a stiff-legged traveling point on running birds, hunt dead and retrieve to hand. In their own individual times, these genes express themselves as instincts through early and extensive hunting. These are soft dogs that thrive on praise but fold if their great trust in you is violated by loud yelling or physical punishment. They should live in the house to develop an early rapport. Do teach “Come,” but make it an invitation, not a command, by starting with treat rewards and gradually replacing them with praise.

Predator instincts awaken early as the dogs chase butterflies and poke their noses into mouse holes, but bird encounters are essential when in the field. Chris and Rick Taylor at Setters West (www.tein.net/sw) train their pups on the wild pheasants and Hungarian partridge they will hunt. Pennsylvania hunter Bill Reid, who has owned several Rymans, was able to train on ruffed grouse. That’s impossible for nearly all of us, including Ken Alexander at DeCoverly Kennels (decoverlykennels.com). Ken has two five-acre pens and a puppy handler who takes the dogs out in a herd. They romp and play and eventually encounter released recall quail near the back fence. They chase and the quail escape over the fence. Finally, they try to set birds.

Chukars or pigeons come next in a bigger field. By then, the pups have been conditioned to both gunfire and the noise of launchers. Some approach too close to the remote releasers without locking up and will chase when birds are launched. Eight or ten birds later, however, intelligence and instinct merge. They set that bird, it’s shot for them, and progress is rapid thereafter.

While these instinctive grouse dogs can excel and have excelled as foothunting companions on nearly all legal bird species, Ken Alexander strongly advises against hunting pheasants first when both grouse and pheasants will be pursued. Chances are, the dog will instinctively relocate on a moved grouse in its first season. Probably in its second season, it will learn to cautiously follow a running grouse with a stiff-legged traveling point at a distance that won’t flush the bird. Later, it can learn that pheasants are fast, determined runners. It will have to race past and do a quick, short hook to trap the bird into thinking, “Freeze. If I fly I’m caught.” Tried on grouse, the quick hook will flush every bird. Backing instincts clicked for Bill Reid’s two dogs, Hunter and Thorne, at about a year and a half.

He saw both dogs on point uphill, went to the nearest one, Thorne, and found no grouse. Okay, Hunter has the bird, he thought. Bill circled a deadfall and found Hunter pointing Thorne. One must have stopped, prompting the other to honor; then the stopped dog stiffened to back the honoring dog.

Retrieving to hand often comes last. Usually they begin by pointing dead birds, or by carrying birds out of dense cover, then making eye contact and dropping them in the open for you to pick up. Breeders point out that, hey, you’re not losing birds. Be patient. Some are into their third year before fetching to hand. It took much longer when Bill Reid, accustomed to Labs, tried to make Hunter hold objects in his mouth as a start toward force fetch. Hunter folded. Bill’s female was allowed to progress naturally and she retrieved early. His pup is having fun playing fetch in the house and may retrieve even sooner.