Set up where you're less exposed to catch a buck off guard. 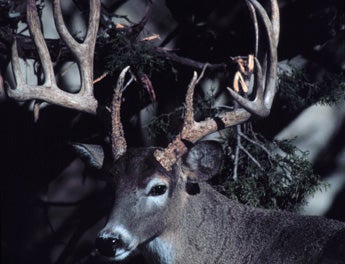 If you came home and found a stranger sitting at your dining room table, you’d come unglued. If you whiffed some dude’s B.O. in your bedroom, you’d really freak out. A wary old whitetail feels the same way about intruders on his turf. If he sees or smells you just once, he’ll go ballistic and change his pattern. You might never lay eyes on that giant rack again, or at least not this season. Rather than hunting tight against a food source, sanctuary or play area where bucks blaze rubs and dig scrapes, it’s often better to lurk in a hallway nearby. You’ll be less exposed and more apt to catch a shooter off guard.

Dining Halls
One of the best spots to see a lot of deer is on the edge of a crop or clover field. Problem is, it’s also a great place to spook them. If the wind blows past your stand and back into the surrounding woods and thickets, no animals will come out. It’s a great vantage point until the first does show up around 4 o’clock, feed out into the alfalfa, smell a rat, blow a gasket and zip away. Any heavy eight-pointer staging back in the woods won’t step out until after dark, if then. And even on those afternoons when you manage to trump the wind, how are you going to climb out of a tree and sneak back to your truck with 10, 20 or even 50 whitetails munching happily right next to your perch? Some hunters think it’s no big deal to spook deer after dark as they walk back to their truck. They’re wrong.

Having busted more critters like that over the years than I care to count, I find myself bowhunting more and more from a stand located 50 to 400 yards away from a feeding area. The strategy works best in semi-open country and when you have a couple of days to do some serious pre-hunt observation. Sit on a hillside a quarter mile or so from a field and glass deer as they slip along a fencerow, riverbank or strip of trees. Look closely and you might see them veer over to walk through a gap gate or hop a low spot in a barbed-wire fence. That’s a great spot for a stand, even though it might be 75 to 150 yards or farther from the groceries. You might swing your binocular and see a big rack coming up out of a narrow ditch or creek bed 200 yards from the far end of the field. That’s another choke point to check out.

From an off-site stand you won’t see as many deer as you would when sitting tight to the feed, but you won’t scare the wits out of as many animals, either. Another great thing is that you can turn many of your evening stands into morning setups. When the wind is right, climb into a stand 100 to 300 yards off a field and try to bust a buck sneaking back to bed at sunrise.

[pagebreak] **Plot Points **
Heavy-racked bucks like to circle downwind of small food plots and oak groves in the evening, looking ahead for does and scent-checking the trails the gals traveled earlier in the afternoon. Just how far the bucks skirt a feeding area depends on the cover.

Check an aerial map of the land that you hunt and study how and where the predominant wind is likely to blow each day in particular areas where deer chow down. Then sneak in and hang a tree stand in the first strip of honeysuckle or brush 60 to 100 yards downwind of the clover or nuts. If the wind is right some evening, a bruiser is apt to cut through that cover upwind of you and give you a shot.

**Bedroom Secrets **
Lying in wait for a big boy to come home after a long night making his rounds is a great tactic, but it’s risky business. The ultimate no-no is to bust a brute where he beds. Big deer typically work toward a sanctuary with their noses dead in the wind, or they quarter and circle a cover with the wind behind them. Either way they check ahead for predators and other deer before walking through the bedroom door. Remember that. You’ll be sneaking toward a bedding area from the downwind side, too, and you sure don’t want to bump into Mr. Big one morninng and mess the whole thing up.

Consult an aerial map as you go in with a tree stand. Pull up at least 150 yards downwind of a weed field, swamp, pine thicket or other cover where you suspect a toad buck is bedding. Now look for a hallway to watch. It might be a small hogback, a brushy edge or a gently sloping draw-any terrain or cover that might funnel a buck to bed. Hunt there.

**Scrape Corridors **
How often have you found some smoking scrapes, hung a tree stand smack on top of them, sat for a week and never seen a shooter? Quite a few, I bet. Here’s a new and better way to hunt scrapes. When you discover the first big black scrapes early this fall, scout out from them in a three-quarter-mile radius. Try to find a few different scrape lines on ridges and in nearby draws, woodlots and edges. Then look for a tight creek crossing or maybe a narrow strip of trees between two of the scrape lines, or near the point where three or four of them converge.

Hang your stand in the choke point and sit for hours. For two or three days before most does come into estrus, tongue-lolling bucks run from ridge to draw to field to woodlot checking their scrapes as well as many of those their rivals pawed out. A huge 8- or 10-pointer just might gallop right down your hallway.