Don't give up on spooked gobblers. Here's how to stay in the hunt. 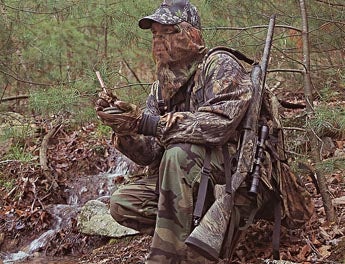 Maybe I panicked. Yes, that’s it. That’s the best way to describe it.

I had roosted the bird the night before and slipped in close under the cover of darkness. I had a decoy set out and had successfully flushed in the opposite direction two hens that had roosted nearby. But when that gobbler sailed from his limb in the early morning and landed gobbling more than 150 yards to my right, I came unglued.

What happened? my mind screamed. He should’ve dropped right in my lap.

I jumped to my feet and dashed forward to close the gap between us and prevent him from getting with one of the hens I’d flushed. I cut the distance by 50 yards and hit my call. The bird gobbled, but I didn’t like my position. Fifteen yards ahead stood a tree from which I would have a better view. I made the move. When I called next, nothing answered. The tom had seen me through the open woods.

I had blown it. Or had I? Tempted to leave, I slowed down enough to collect my thoughts and think through the situation. I devised a strategy. It wasn’t time to call it quits on this bird just yet.

It Happens
Whether you’re new to the sport or a turkey-hunting veteran, you’ll spook a turkey you’re trying to call in once in a while. Most of the time, a hunter scares a tom from his morning roost because he tries to set up too close to the bird and the turkey hears or sees him. Remember, early in the season there aren’t many leaves to obscure a roosted turkey’s view. Later in the season, leaves break up the view, but they also make birds sound farther away.

Other times, a hunter inadvertently walks up on a tom standing in a trail or on the edge of a field or, as in my situation, while trying to move in open woods. It doesn’t take much of a sight line for a tom to detect movement. Sometimes a gobbler will approach your setup, not see the hen he’s looking for, get nervous and stroll off.

The good thing about all of these situations is that as long as it’s early in the day, you can still call in that bird.

The First Step
Whether you walk up on a turkey or he spots you moving as you work a call, watch and listen for the direction in which the bird takes off. He usually won’t go far, typically less than a couple hundred yards, particularly if he runs. Should a turkey take wing, he might go a little farther, but he will still usually remain within earshot and can still be worked.

Note which way the bird went and back out of the area. For Woodhaven Custom Calls owner Mike Pentecost, it’s all about gaining altitude in the mountainous areas where he hunts.

“I try to figure out which way the bird went, where it is going to go and what it is probably going to do,” says Pentecost. “Then I try to get above the bird, where I give it time to crank back up. While I’m sitting there waiting, I try to think about what went wrong and how to avoid it in the future.”

If the bird was cranked up before he spooked, there’s a good chance he’ll start gobbling again once things settle down, usually 30 or 40 minutes later. Pentecost sits where he can hear down both sides of a hill. If the bird he bumped doesn’t gobble, he’s apt to hear another one.

Regardless of whether you hunt mountains or flatland, work toward a bumped bird from a different direction, without letting him see you. In the case of the hunt at the beginning of this story, I made a wide loop around the area from where I last heard the turkey and came in from the opposite side. Use depressions in the terrain, raised creek banks and trees to stay hidden as you quickly move around the turkey’s probable location.

[pagebreak] Sound Off
Once the bird gobbles, simply move back in, being extra cautious not to be seen. While you typically want to get as tight to a bird as possible before calling, you’ve already scared this one once. He might still be jittery, soo hang back and don’t push your luck.

If after 30 or 40 minutes you haven’t heard anything, find a good spot to set up opposite from where you were earlier and start to call. There’s a good chance the bird might associate the call you were using when you spooked him with the danger he sensed nearby, so switch to one with a different sound.

But there’s an exception to this rule. “If a bird gets nervous because it didn’t see the hen it was looking for and just slides off, I’ll get in another spot and start calling with the same call,” says Pentecost. “He was interested in what I was doing before, so why change it?”

Flocked Up
When a hunter spooks a gobbler that is with hens and they take off in opposite directions, take a chapter from your fall turkey-hunting playbook and set up between them. But position yourself closer to the tom. Then start calling like a hen eager to get back to her man. Mix yelps, cutts and cackles, varying your tone and cadence to sound like different hens. That should get the bird cranked and coming in no time. If the hens walk into your setup before the longbeard gets there, don’t give up. Just sit tight and let them linger; they might bring the big boy right to your gun.

As for the hunt earlier in the story, I set up again on that gobbler and called him just a few steps short of being in range when he got nervous and eased out of sight. Undeterred, I made another loop around him, came in from yet another direction and set out a decoy. I was actually surprised when I called him in again. This time I squeezed off a shot-and missed! But then, this article isn’t about shooting turkeys, it’s about calling them in. Connecting is another story altogether.

** Primos Custom Wood Strikers**
Primos is offering two of its new custom-grade laminated wood strikers in one pack. The Double Down is a straight-tip striker best used with high-frequency calls, while the mushroom-tip Lucky Striker produces loud, raspy cutts. ($23; 800-523-2395; primos.com)