Leave your flashlight and bag at home. The snipe is for real! 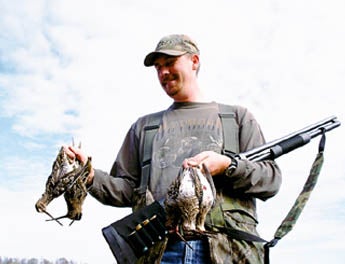 No rabbits. No woodcock. No quail. One day last fall, the coverts we hunt proved to be barren. After four hours of busting brush, we loaded up and headed toward home, frustrated and empty-handed.

“What now?” I asked. My buddy Lewis shrugged, but Josh had a suggestion. “I know a field where we might find some arrowheads,” he said. Minutes later, we were there. But instead of arrowheads, we found an even greater prize to pursue-snipe. The muddy farm field, 50 acres along a wooded slough, contained hundreds of the drab-colored shorebirds. We spotted them from afar and weren’t certain what they were at first. I grabbed a binocular and peered through for a closer inspection.

The Prank Bird
A quick glance confirmed my suspicions. The birds were Wilson’s snipe, also known as common snipe or jacksnipe. Snipe resemble their cousins, American woodcock, but are slightly larger and have different color patterns and longer bills. All the field marks of a snipe were evident on the birds I saw: distinctive striped heads and rust-colored tails. Each was the size of a skinny quail. In flight, they resembled winged golf balls carrying their own tees.

“Want to go on a snipe hunt?” I asked. Lewis and Josh looked a bit puzzled, and with good reason. Like thousands of hunters, this pair once had been targets of that hoary prank perpetrated on the unwitting. The classic scenario involves a scared kid being taken into a marsh at night, given a lantern and a burlap sack and told to wait until others of the party drive a snipe to him. The victim is told that his important task is to hunker down and hold open the bag until a snipe comes along and runs into it. What actually happens is that the others go home and leave the unfortunate dupe to fret over a thousand spooky swamp noises. Such “snipe hunts” have been practiced for decades so it’s sometimes difficult to convince otherwise rational people that there really is such a thing as a snipe. Or that there really is such a thing as snipe hunting with guns.

Travel Light
I convinced my companions that the birds we saw were the genuine articles, and as Lewis and Josh soon discovered, honest-to-goodness snipe hunting can be a blast.

We loaded our shotguns and began making our way across the field in ankle-deep gumbo. Lesson One of snipe hunting goes something like this: “Wear rubber boots, and prepare for intense muscular exertion.” Snipe hunting often involves trudging through water and mud up to the knees. Another likely prospect entails picking one’s way through a soft marsh, springing from tussock to tussock, with the likelihood of tumbling from those unsteady foundations into mires of unknown depth.

Consequently, the snipe shooter who travels light travels best. Your shotgun should be light, and shells need hold no more than an ounce of No. 8 or 9 shot. These birds are easily dispatched. Further, the average snipe is so small and so prone to flush at a considerable distance that it is important to send as many pellets as possible after it.

[pagebreak] At our approach, several wisps of snipe took flight. As each of us swung on a longbill, we were confronted with Lesson Two: “A fleeing snipe has no idea where it’s going, which makes shooting one very difficult.” When they rise from the ground, most birds start a particular line of flight and keep to it. Not so with snipe: This bird flushes, darts a few yards one way, changes its mind and perhaps turns at a right angle to its original course. Then it might suppose it has made a mistake after all and once more alter its direction. The bird might rise high in the air and circle for a while, looking for a desirable spot to alight, or settle into a straight, swift course that doesn’t end until the snipe forgets that it’s frightened. This eccentric flight pattern puzzles many sportsmen, and some who are capital shots at other birds are frustrated by snipee. They might as well be holding open a bag in the dark.

So the shooting went for us, at least during the opening volleys of the hunt. If we zigged, the snipe zagged. When we swung left, the snipe veered right. Many rounds were fired, yet the snipe flew on unscathed. We followed them all over that field, leaving a trail of empties and muddy bootprints behind us. I decided if we ever did bag a snipe, it would be as costly a bit of fowl as was ever put on a table.

Shoot Fast
We finally managed to down one, however-then another and another and another. For that, we owed much gratitude to the snipe, which possess one trait that is helpful to a hunter. Where they’ve not been hunted much, these “shad spirits,” as they’re sometimes called, often drop back to the ground a few yards from where they flushed. Some birds fly straight up until they’re just specks in the sky, then plummet back and light near the same spot from which they took off.

The problem here lies in marking birds down. Snipe, with their amazing camouflage, are ghosts on the ground. Even when you mark one carefully and search the terrain ahead as you approach, it’s often impossible to see the snipe. For conservation’s sake, it’s better to find one snipe as soon as you down it than to try for doubles when the opportunity arises.

Hunting pressure makes the birds steadily wilder, even though it may not cause them to abandon good areas. After just one day of shooting, the birds might get so spooky that on the next outing you might walk for hours, putting up scores of snipe without a single one being in range.

After Lewis, Josh and I had burned through half a box of shells apiece, we were wise to some snipe tricks. We figured out that the birds usually rose against the wind and that by advancing on them with the wind at our backs, we forced them to fly toward us for some distance, thus allowing a shot at fair range. We also learned that a snipe can’t be shot too quickly, especially if it rises more than 15 yards from the shooter. (They seldom rise closer.)

Hunt ‘Em While You Can
Open marshes, rice fields, lake and stream edges, shallow drainage ditches and damp mud flats all are prime hunting areas if the cover is not too thick to allow snipe access to the soil. The snipe will leave if the ground freezes or becomes iced over, since they feed by probing the soft earth with their long bills.

And so we come to Lesson Three: “Snipe are uncertain birds.” You might find them on a particular piece of ground in great numbers one day, then return the next and discover that they have completely disappeared. A bog that afforded splendid shooting at evening might be visited at dawn the next day and be found bereft of birds. Such are the vagaries of hunting. If you come across snipe, hunt them right then. They might not be there the next time you pass that way.

After four hours of almost nonstop shooting, Lewis had bagged six snipe, Josh five. And me…well, let’s just say I wasn’t as quick a learner as my friends. I went through two boxes of shells and had only a single bird to show for it.

I did learn one thing, though: When other game animals are scarce, snipe can save the day. These skinny little shorebirds can be difficult to hunt and even harder to hit, but when you’re in the mood for some fun, fast-paced gunning, snipe are hard to beat. They’re abundant, widespread and excellent on the table.