How to maximize your effective range. 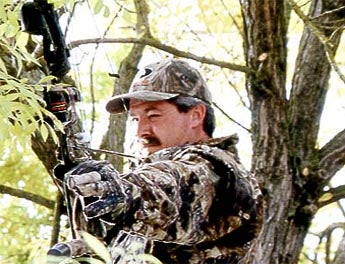 This is one of those touchy subjects sure to bring in baskets of mail, so I want to assure you up front that I am not advising you take the kind of shot that might be referred to as a “Hail Mary.” There are, however, some things you can do to become more proficient at longer ranges. That way, when a monster buck steps out at 42 yards, you’ll know whether you can ethically handle the shot.

Follow Through
Before we talk about gear, we have to address shooting form. Tim Strickland, who has tutored Olympic archers, says, “Most archers make a fundamental mistake when shooting at longer distances: The split second after release, their bow arm collapses and the bow obstructs their line-of-sight to the target. To compensate, the shooter attempts to peek around the limbs to see where the shot hit-or, more likely, didn’t. In the process he pulls his shot left or right.”

Strickland says, “Stay with the bow just like golfers continue their swing after hitting the ball. ‘Follow-through’ means allowing the bow arm to extend forward and the release arm to continue backward at release. Picture yourself holding a stretched rubber band instead of a bow. If you cut the rubber band, your arms move in opposite directions. That’s follow-through.”

Stay Loose
Curtis Beverly, who has coached nearly 20 ASA Professional World Champions, says, “Archers feel uncomfortable on longer shots because bow movement is exaggerated in their sight windows-because the target is smaller, you notice pin movement more. Archers often try to fix this problem by attempting to hold their bows steady by tightening up. This makes it worse, because now they are shaking and are more likely to jerk the trigger.”

Get the Range
Now let’s look at gear. Archery guru George Chapman, who has coached more than 350 World and National champions, says the first thing you should do is buy a range finder. (Good models are available from Bushnell, Nikon and others.) An arrow might drop as much as a foot between 40 and 45 yards, depending on your setup. **

Shoot Smaller Targets**
Beverly recommends perfecting form at 20 yards by targeting 1-inch stick-on dots instead of the large bull’s-eyes that are standard on bag targets. By training yourself to hit these small dots, you learn to concentrate and pick and hit a small spot on a deer. Get comfortable and consistent at 20 yards on dots, and then move back slowly, 2 yards at a time. Repeat this and soon you’ll have extended your comfort zone.

Use a Drop-Away Rest
Long shots are perhaps the best reason to switch to a drop-away rest. The operating premise is simple: At release of the arrow, the rest drops out of the way with little arrow shaft contact. Shots are more accurate because shooter error is not transferred to the shaft through the rest. Two models I like are the Dropzone by Trophy Ridge _($109; 406-388-7781; www.trophyridge.com) _and the Shakey Hunter by Trophy Taker _($91; 406-826-0600; www.trophy taker.com). _

[pagebreak] 5 More Ways to Shoot Farther
** Opt for a lighter arrow:** By switching from an aluminum to a carbon arrow with a 70-pound bow, you can gain as much as 25 feet per second (fps), which translates to as much as 4 to 5 inches in elevation at 40 yards.

Choose a lighter broadhead: Switching from a 125-grain broadhead to a 100-grain model can increase your arrow speed by as much as 3 to 4 fps. This extra speed increases elevation by 1 to 2 inches at 40 yards.

Get a longer bow: Opting for a bow with a longer axle-to-axle length can increase your accuracy on longer shots. Long axle-to-axle bows are inherently more accuurate than their shorter cousins. The longer a bow is from axle to axle, the easier it is to shoot at long range.

Increase your brace height: Look for a bow with a brace height that exceeds 7 inches; these are affected less by poor archer form.