Marking Off the Barrel

Pointing the gun points your dog to the bird. 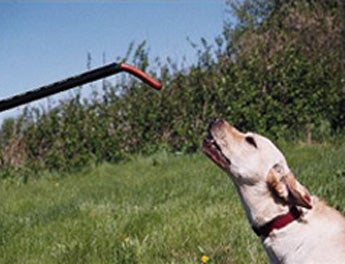 Last month we saw how Ken Osborn’s training sequence steadies retrievers to neighboring gunfire and other hunting distractions. What we didn’t see is how this also teaches dogs to mark off the gun barrel.

Osborn works from a backyard training blind with birds, launchers and primer blocks out in front of it. A Master’s Voice gun-shy cure recording plays its all-gunfire last segment in a boom box about 20 feet away (any farther makes the gunfire sound too distant). When trainees go wild looking for birds during all that “shooting,” Ken simply keeps saying to them, “No birds.” Only when he swings a gun will a bird launch and a primer fire. And only then does the dog get to retrieve a bird.

At first the launchers are throwing dead pigeons saved from other training sessions. The “gun” may be just a pipe barrel taped to the edge of a roughly shaped board stock. It doesn’t matter because the air is loaded with gunfire sounds, and it’s only his action Osborn wants the dog to watch for. And watch dogs do, because it signals fun. Finally, when the dog shows full gunfire acceptance, live launched birds are shot from inside the blind. And the dog knows to fetch where the gun points.

Heel Control
Amateur Don Goodwin Jr. (see Hunting Dogs, “Retrieving to Hand,” April) likes training to be fast and fun. But he cherishes nature’s sights and sounds-and silence-and absolutely hates shattering it with the piercing whistles and loud yelling necessary to handle dogs to fallen ducks. To avoid ruining what he loves most about waterfowling, Goodwin willingly works long and hard assuring that his dog can make unassisted retrieves. The groundwork for this is learning to heel perfectly-anytime, anywhere and under any distraction.

Marking off of the gun barrel then begins in the living room. “A hot dog stuck in my gun barrel gets the dog’s attention when I say, ‘Watch it,’ but with tight heel control I can stop him from jumping out and snatching it,” says Don. “I slowly, carefully lead him around in a circle at first, then gradually expand the course. When raising the muzzle gets instant attention, we move to the blind, where bird launchers are stationed on all four sides. Getting to retrieve soon has the dog watching the sky wherever the gun points.”