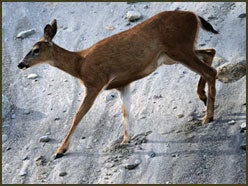 Douglas Hatton does not know if the 2003-04 season will stack up to the 2002-03 season, which stands as the record for total deer harvest (94,114). He suggests that sportsmen explore the less-agricultural wooded areas of the state’s western region, where deer concentrations are highest, or try some of the farmlands in the eastern and central reaches for the bigger-bodied specimens. Crossbow enthusiasts will also have their chance this year during two weeks in October and two more in January. (Crossbows may also be used any time during the firearm season.) Contact: Maryland Department of Natural Resources (410-543-6595; www. dnr.state.md.us).