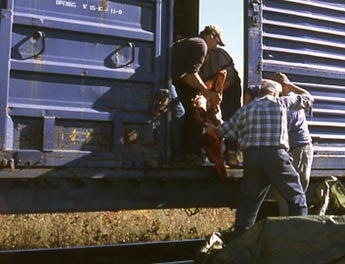 DAY FOUR -10/10
Dad and I awoke before dark today to give ourselves plenty of time to make the rather uneventful two-and-a-half-hour drive north from Gowganda to Cochrane. We had some time to kill before the train was to leave Cochrane so we stopped for coffee and apple fritters at a Tim Hortons in town. “Timmy’s,” as Ontarians refer to the popular restaurant chain, was founded by the legendary NHL star of the 1950s ’60s and ’70s, who was tragically killed in a car crash in 1974.

Well over 90 percent of the passengers on the Little Bear (http://www.ontc.on.ca/) are native people (primarily Cree) who are either on their way home to Moosonee (http://www.townofmoosonee.homestead.com/) or Moose Factory Island, or taking the train to visit friends and relatives in one of the two villages that lie at the mouth of James Bay. Moosonee, on the mainland, and “The Factory,” which sits in the Moose River, are inaccessible by road.

We make two stops along the way to pick up hunters. In Fraserdale, the head of a bull moose is lashed to the front rack of a 4-wheeler, that is driven up a ramp onto one of the freight cars. At Otter Rapids they load the processed parts of a moose cow and a calf.

As we travel north toward the James Bay Lowlands, the trees become fewer in species and number and shorter in height. Scrubby little conifers dominate the large swaths of landscape between the meandering rivers. When people in these parts say they’re “going up to fifty-first,” they don’t mean “street,” they mean “parallel.”

At the 131.5 mile marker, where the tracks cross the Onakawana River, our guide William Tozer (705-336-2866) and his family wait beside the tracks. My father and I unload our gear from a freight car as William’s wife and kids hop aboard to head home to Moosonee after a week’s vacation in the bush. After dad and I introduce ourselves to William, we pack our gear into a waiting cargo canoe and motor a few miles downriver to William’s cabin at the junction of the Onakawana and the Abitibi. I say downriver, but we are, in fact, travelling north. Up here all water flows north to the Arctic Ocean.

The cabin, along with several outbuildings, sit on a one-hectare piece of property William rents from the government on a yearly basis. He built the cabin in 1997. The river flows about 30 feet below the level of the property. However, in late winter and early spring that isn’t far enough, says William. The ice piles up and creates an unimaginable 400-yard-long dam across the river, causing the water to flood into the yard.

We throw down our gear and suit up for a short afternoon hunt, motoring back up past the rail bridge several miles. We pass a group of William’s friends, three natives from Moosonee, whose canoe is weighted down with hunting gear, camping equipment and a 4.5-year-old bull moose. The 45-inch-wide rack is draped across the top of the gear in the middle of the craft. My father and I look at each other, wide smiles across our faces. We’re in the middle of some of the wildest moose country and it’s becoming apparent that there is no way we will be denied at least a cow.

The sun begins to set and the temperature plummets, so we head back to camp for a warm meal of fresh moose tenderloin. One of William’s sons had shot the young bull a couple of days before. Our dinner coversation centers on how far from civilization we really are. We’re over 50 miles from Moosonee. And via subway, bus, pick-up, train and cargo canoe, I’m a thousand miles from my apartment in Brooklyn.