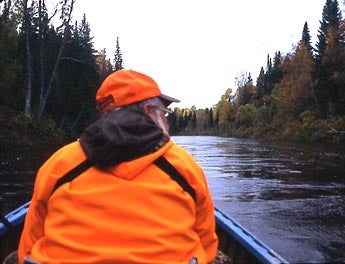 DAY FIVE – 10/11
Today we traveled up the Onakawana River about 35 miles to a campsite where we’ll spend the next couple of nights in a wall tent. By travelling south to the campsite we gained approximately 300 feet in elevation, coming out of the lowlands. There are a lot more birch and poplar trees in this landscape, as compared to downriver (north of here).

The trip took a long 5 hours, as the river winds back and forth and there are a lot of large boulders under the surface that you have to avoid. Luckily the cargo canoe is a comfortable ride-and spacious. We packed clothes, rifles, the tent, tarps, two coolers filled with groceries, a chainsaw, several gas cans, a stove and a lantern along with a tank of propane, and we still had room for three grown men. And William insists that we’ll be able to cram a whole bull moose in there on the return trip. Here’s hoping we’ll have to deal with that. Seems like it would be a good problem to have.

If we do get a moose here, it’ll have to come tomorrow at the earliest as we’re done hunting for the day. After we erected the tent we had a quick lunch of sardines in mustard, bologna sandwiches and Ramen noodle soup (it’s amazing how anything tastes good when you’re camping), and headed out for a short afternoon hunt. We continued upriver past our campsite in the canoe for about 7 miles before we turned around. We didn’t see any moose, but there was a good amount of sign and William is very optimistic about our prospects for the morning hunt. We saw a few beds, and several sapplings and branches are snapped off 7 to 8 feet above the ground, the victims of heavy swaying antlers. The most prevalent sign, though, was the half-eaten red willows that line both sides of the river. Our guide William says the moose primarily feed on the aquatic vegetation that grows in the beaver ponds which lie back from the river in the bush. When that vegetation dies in the fall, the moose make their way out to the river where they feed on the red willows. It’s apparent that that’s what they’re doing now.

The day started out overcast, and for a while we thought it might be a wet ride to the campsite, but the sun emerged around noon and the afternoon was gorgeous, with temperatures in the 60s. Once the sun goes down, though, the mercury falls fast. Luckily this tent heats easily with the stove and lantern going. In fact, with the moisture in the ground, it feels almost like a sauna in here. That, combined with a belly full of pork chops, a mug full of whiskey and a head full of thoughts of seeing huge moose in the morning has me in a pretty good mood as the second day of the hunt comes to an end.

Missed the First Two Entries?BR> Click below to read them now.