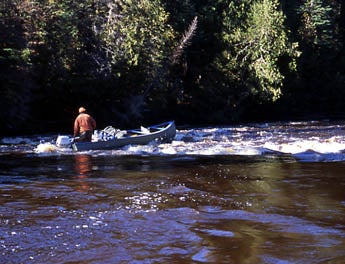 DAY 6 – 10/12
I awoke at 3 a.m. after just a couple hours’ sleep. Someone filled my sinuses with concrete after I fell asleep leaving me unable to breathe. Between that and some truly prolific snoring by my tentmates, I was up all night.

Nothing a little coffee couldn’t cure, though, as we prepared to head out for the morning hunt. William, our guide, said that when he brings a client to a spike camp, 90 percent of the time they connect on a moose either the first night or the next morning. We didn’t connect last night, so hopes were soaring this morning.

We hopped in the canoe and went back upriver, seven or eight miles past where we had seen all the sign the night before. Not seeing any moose on the way up, we stopped at several spots on the way back down to inspect the sign more closely and do a bit of calling. William said most of the beds and prints we saw along the river are two days old, but he was surprised that we didn’t see any of the same moose that made those beds and prints. His only assumption is that, while there is some sign of them eating at the shore (the munched-on red willows), the moose aren’t feeding hard and there is still enough food farther back in the bush. We did notice the gut pile of the bull moose that William’s friends had shot a few days prior and which we saw in their canoe the night we arrived via the Little Bear Express. The pile was just a mile upriver from our camp. Clearly, their presence in this area in the days before we arrived has hurt our chances of killing a moose.

We had a lunch of beans and bacon before striking camp and heading back to the cabin. The Onakawana has dropped nearly two feet since yesterday and five since Sunday. William said if we spend another day at the campsite, we might not be able to get back to the cabin. In fact, Dad and I had to get out of the boat at one rapids and walk the shore so William could more easily navigate the boulders.

On our return, we see that the Abitibi, which is regulated by the dam at Otter Rapids, is down between 10 and 12 feet. A canoe that was floating in the river when we left yesterday is now completely beached. William says this is normal with the dam release schedule. The water will come back up tonight, and will drop throughout the day tomorrow.

A warm night inside will be good for my congestion. We’re going to hunt along the Abitibi tomorrow. Fingers are permanently crossed now, as we’re running out of time. A group of hunters from Michigan will arrive at camp on Friday for a hunt next week. Friday is Dad’s and my last hunt day here. I think he’s getting a little concerned about our prospects. I know I am. No one said it was going to be easy, and I’m beginning to wonder why I ever thought it would be.

More fresh moose for dinner isn’t a bad thing, though.

[pagebreak] DAY 7 – 10/13
We’re back for a lunch of ham steak and eggs after another uneventful morning. We went up the Little Abitibi River a short way before the water started to drop. While we were there, William did some calling using a simple contraption he had made. The call is just a 3-pound coffee can wrapped in duct tape with a piece of string knotted and run through a small hole in the base. William wets the string and runs his thumb and forefinger down the length of it from the can to the end. The result is the most plaintive, heart-sick cow moose call I can imagine. It reverberates over this flat landscape for miles.

After receiving no response, we hopped back in the canoe and motored up the main stem of the Abitibi, stopping and calling along the way. One stop yielded a fresh set of bull tracks from earlier this morning. If we hadn’t gone up the Little Abitibi, there’s a chance we would have seen him.

We parked the canoe across the river from the tracks and called for a while, but again, nothing. We then went downriver another mile or so and called, thinking the bull might be on the move. He didn’t show.

We’ll head out again in an hour or so. William said to bring along our fishing gear this afternoon.

We’ve returned from our afternoon hunt/fishing trip with a 4-pound northern pike that I caught on my fourth cast. Another mooseless afternoon, though. Clouds gathered as the day wore on, and it seems we’re in store for quite a bit of rain tomorrow. It’s very windy this evening. William says that we’ll go back to where we saw the fresh prints this morning. Dad and I are both in utter disbelief that we’ve seen zero moose in three-plus days of hunting. One day to go.