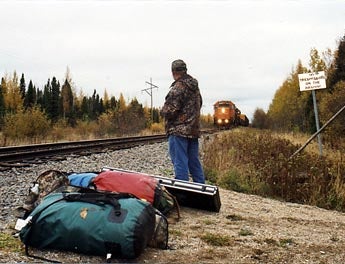 DAY 8 – 10/14
We got to where we saw the fresh tracks yesterday early this morning and set up on the bank across the river. Dad and I sat on a couple of logs, glassing occassionally, as William called with both his mouth and the coffee can contraption. After three hours it became apparent the bull either wasn’t interested in responding to the calls or had moved on altogether, so we got back in the canoe and motored back to the cabin for lunch, getting soaked along the way as the skies opened up.

After lunch, William took the canoe to the train tracks to greet the guys from Michigan when they arrived on the Little Bear Express. Dad and I did a land-based hunt for the first time all week as we walked a 3-mile trail out to the tracks. We figured getting off the river might just be the ticket, considering we hadn’t seen hide or hair of a moose on the river all week. Plus, William said that one of his clients shot a moose on the trail last year on his last night in camp. So we had that going for us.

Well, we didn’t have the same success as the fellow last year. But we did get more exercise than we had gotten all week and we saw several spruce grouse along the way.

The hunters from Michigan are in camp now. We’ll have dinner with them tonight and share some stories over whiskey, but tomorrow we’ll hike out and wait for the Little Bear to take us back to Cochrane.

It’s been a great week here in the wilds of northern Ontario, despite the lack of a moose. I won’t forget it anytime soon, and I hope Dad won’t either.