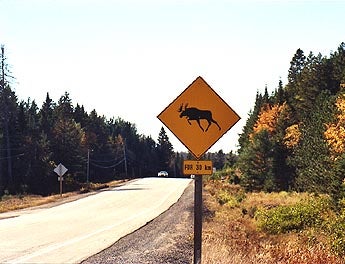 DAY ONE- 10/7
I left New York City today amid warnings of an alleged terrorist plot to detonate several bombs on the city’s subway trains. The temperature is still in the mid-70s and people in the Big Apple are starting to wonder if the rain will ever stop. It’s strange to think about how far removed I will be from all of this in a couple day’s time when my father and I reach the Onakawana River Crossing on the Little Bear Express, a flag-stop freight-passenger train which runs between Cochrane and Moosonee, Ont., and operated by Ontario Northland (http://www.ontc.on.ca//). We’re going to hunt moose for a week with guide William Tozer (705-336-2866) , and there won’t be another person for dozens of miles around us.

According to the foliage map on the back page of today’s New York Times sports section, the Adirondacks are the only spot in New York to feature “peak” color right now. But as I ride west on Route 17 on a bus through New York’s Southern Tier, I have to disagree. The foothills of the Catskill Mountains are resplendent with brilliant reds, fiery oranges and mustard yellows. Here and there, woodsmoke rises from the chimneys of otherwise hidden hillside homes. Fall is here, and with it hunting season.

I’ll be at my father’s house in Hamilton, N.Y., in a few hours. We’ll pack all our hunting gear tonight and set out for our family camps in Gowganda, Ont.-a 12-hour drive-in the morning. We’ll spend a couple nights there closing up the camps for another year. Then we’ll continue on to Cochrane on Monday the 10th.

DAY TWO- 10/8
Last night we talked by phone to Wayne Durling, a friend in Gowganda who guides for both moose and black bear. Wayne said that two of his clients had already taken bulls with their bows. Rifle season opens there today. This will be the first moose hunt for both me and my father, so just the mention of successful hunts makes us eager for it to begin. It will be good to spend a couple days in town talking with other hunters before we head into the bush.

As we make our way through southern Ontario and Algonquin Provincial Park, there is a crisp chill to the air, and the foliage is brilliant. We’ve driven past several groups of hunters, easily identified by their camouflage caps and jackets and their trucks and trailers loaded with 4-wheelers and campers. Even the border guard mentioned that years ago he used to hunt at a camp on Duncan Lake, not far from Gowganda. It seems everyone has moose on the mind.

Luckily, we don’t have anything in tow with the gas prices what they are. The good news is it’s only $1.08 Canadian. The bad news is that’s per liter.

There isn’t a cloud in the sky today. The smell of woodsmoke fills the air in town. The overnight temperature was in the high 20s. The Cases, a family from Chatham, Ont., who own the camp across the street from us, set off early this morning on their 4-wheelers, like a biker gang whose chapter’s color is blaze orange. They’ll cruise the miles and miles of logging roads around town in search of moose sign.

My father and I have a busy day ahead of us, sorting and repacking our hunting gear in waterproof bags and winterizing the camps. That involves a number of tasks, including unhooking the water (we draw it from the lake) and locking up the outhouse.

*****************************
Dad and I had a few beers with Jim Case and his wife Judy tonight, sitting around the woodstove in the workshop behind their camp. Judy works for the Ontario Ministry of Natural Resources. Most of the talk centereed on game management. That tends to happen when a group of eight hunters covers hundreds of kilometers of wilderness in a day and doesn’t see much at all in the way of moose sign, as was the case with Jim and Judy’s crew today. Jim feels there are just too many hunters around. Another neighbor, Rene Pilon, says that all of the logging in the area and the subsequent spraying they do to kill the underbrush has pushed the moose out of the area. Another theory is that too many calves have been killed in recent years. (All landowners are guaranteed a calf tag; cow and bull tags are awarded through a lottery.) In all likelihood, it’s probably a combination of the three.

My father and I have a bull tag and a cow tag waiting for us up north. Maybe by this time tomorrow we’ll already have one filled.