Muleys on the Go

The onset of winter signals the arrival of new opportunities for deer hunters. 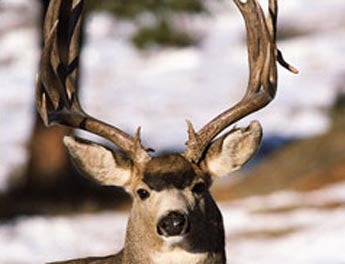 Scouting for mule deer during the summer and early fall can be a wasted effort. By the time hunting season arrives in late fall the deer might have migrated clear out of the neighborhood. For a hunter to be successful, he must be as mobile as the mule deer he’s seeking.

How far mule deer migrate depends on the terrain and the severity of the weather. Some deer move only a couple of miles to tall timber that reduces snow depth, or to a south-facing slope with good exposure to the sun. When the winds howl and the bottom drops out of the thermometer, deer on the prairies travel long distances to find areas with browse and protection from the weather. One Wyoming herd travels up to 85 miles to its winter range, according to biologists who have tracked the wandering muleys.

On the Move
Russell Woolstenhulme, a predator biologist with the Nevada Division of Wildlife, recently completed a mule deer study in Lincoln County. A combination of increasing snow depth and falling temperatures force deer toward their winter range. “Nevada is pretty dry,” Woolstenhulme says, “so the availability of water has a lot to do with migration.” For example, deer on one area of winter range gathered near a spring but left when it dried up.

Mule deer usually move in stages to their winter range. As they stream out of the mountains, deer often stop for days at a time in transitional ranges at different elevations, depending on the severity of the weather. Muleys follow the same routes and return to the same range every winter. “No doubt these routes are imprinted on a fawn the first year it is led to winter range by its mother,” Woolstenhulme says. “The next year the fawn remembers and goes that way again.”

Studies of migrating mule deer in Idaho and Colorado found that the deer were so intent on returning to the same place that while en route they march through winter range used by other deer. The Idaho study also determined that migrating deer follow topographical features, like ridges, as they move to lower elevations for the winter.

The reward for the long journey is warmer temperatures and lower snow levels. Consequently, muleys expend less energy while moving around and have easier access to browse. “When mule deer don’t have to dig so much through the snow for browse, they’re not using as much energy,” Woolstenhulme says.

Deer moving through snow more than about 20 inches deep expend five times as much energy as they do when covering the same terrain with no snow. In central British Columbia snow depth is the key factor influencing habitat selection. That province’s deer winter mainly beneath stands of mature Douglas fir trees, whose thick, high crowns intercept much of the snow. The deer browse heavily on the firs and arboreal lichen that grow from the branches and are knocked to the ground by the snow.

[pagebreak] The Weather Trigger
Rod Bohn operates Wildlife Adventures (800-850-9214, bchunter.com) and guides hunters to mule deer migrating out of British Columbia’s Wells Gray Provincial Park. Here, in the northernmost reaches of the mule deer’s range, a hunter can mark his calendar by the stages of the deer’s migration. Bohn says the migration out of the park’s mountains comes in three waves: does and fawns beginning on October 15, followed by young bucks on November 1 and mature bucks on November 15. “My partner, Ron Emmelcamp, has been watching this migration for forty years, and he says it’s set in motion by the shortening amount of daylight in the fall, just like what triggers the rut,” says Bohn.

The deer move down from the mountains in stages. “They’ll go down some in elevation, stay there for a few days or so, then drop down to the next elevation,” according to Bohn. Hunting is difficult during that stage of the migration because the deer are spread over a wide area. Plus, the deer are usually on the move, so there is noo discernible pattern.

“The only thing that upsets the routine is if there is a heavy snow and the temperature drops quickly,” says Bohn. “Then all the deer will start moving at once, and they’ll go right on to their winter range. So many deer will take the same path that it looks like cattle have pounded it down.”

Bohn says that waiting near such trails for a shot at a buck is pretty much a waste of time. Muleys feel vulnerable when they’re migrating, so they move mostly at night. “Predators, including mountain lions, keep the deer really spooked,” he says.

Instead of hunting deer while they’re migrating, Bohn hunts for them near their winter destinations. The combination of the migration and the rut makes mid to late November the best time to hunt mule deer in his area. Farther south, in the Western U.S., the start of annual muley migrations is less predictable because of the vagaries of weather, but the same principle applies: When an abrupt change in the weather is forecast, look for deer to start moving in stages through their traditional winter travel corridors.

Tracking in the Snow
At morning light Bohn likes to take a stand with a good view between the valley bottoms and foothills where mule deer feed and the timber above where they bed during the day. “Bucks moving to their beds don’t move all that fast, and we usually have time to stalk within range,” he says. “Then, too, if the temperature is really cold, bucks might be out feeding all day.”

[pagebreak] Once muleys have gone into the timber to bed, Bohn and his hunters hike across the deer trails until they find a big buck’s tracks. “You know the kind-big across as your fist,” he says. “When we find one like that, we follow it.” Bedded in thick cover, a buck often sees a hunter approaching on the track. The buck might jump from its bed and run but usually stops after a few bounds and turns back to stand. Those few seconds are the time to shoot.

Keeping tabs on the climatic changes that force mule deer toward their winter range is as easy as checking the weather report. Tracking the deer as they migrate requires time behind a binocular and sweat from uphill hikes. In the end, though, when the mule deer reach their winter range, they’ll be right where you want them.

Angling for a Sharper Blade
Nothing beats a set of diamond sharpeners for putting a keen edge on a hunting knife, provided you can maintain the proper angle on the blade throughout the sharpening process. DMT offers one solution to a common problem with its Aligner Sharpening System.

A clamp-on angle guide is at the heart of the system, which also includes a trio of 4-inch diamond whetstones and an accessory for sharpening serrated blades. The clamp holds the blade securely at one of seven angles (depending on the recommendation of the knife manufacturer or the user’s preference) while a whetstone is worked along the edge. (About $60; 800-666-4368; dmtsharp.com)