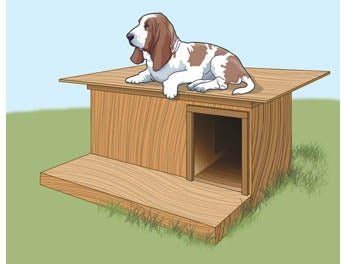 Since my plans for the “mutt mansion” were first published, several readers have written in with design improvements they wanted to share with other builders.

– One reader, whose doghouse was located on a concrete slab in a kennel, raised the structure with two-by-two legs to aid in drainage. Because that further exposed the floor to cold air, he insulated the interior house walls and roof and under the floor with 1 ½-inch Styrofoam sheets, covered by 1/8-inch hardboard.

– Readers with larger dogs suggested simply raising the walls 2 inches up from the bottom of the two-by-four base to add a little height.

– The porch was welcomed by owners who had concrete runs, because of extremes in hot and cold weather, but a reader whose doghouses sat in a dirt-bottom pen dispensed with the porch because his dogs stay inside during the cold and lie on the cooler ground when it’s hot.

– Another reader noticed that his Lab avoided the doghouse during summer heat. He put a thermometer inside and discovered the temperature was 105 degrees when it was only 80 degrees outside. He replaced the winter roof with an uninsulated summer roof that was not only painted white to reflect the sun’s rays and heat, but had an 8-inch instead of a 4-inch collar. Then, using wood screws, he fastened a 1-by-1-inch strip all around the inside of the collar about halfway up from its bottom. This inside trim acts as a stop to hold the new roof 4 inches higher than the original. In the two end pieces of the roof collar, cutouts were made above the 1-by-1 stop. These allow hot air to exit, but the roof still keeps the interior dry. The openings are covered with screening to keep out mosquitoes and flies. In addition to lowering the interior temperature to 70 degrees when it’s 85 outside, the summer roof also gives larger dogs 4 inches of additional height.